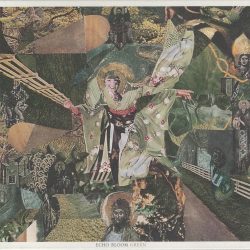 This album gets off to a great start. The opening track ‘Comet’ is an atmospheric number, tightly played but with plenty of space and texture to the music. Second track ‘Duke’ is gritty and a great change of pace from the opener, with a good guitar tone and some terrific vocal work from frontman Kyle Evans, backed up by keyboard player Aviva Jaye. At this point this is a really interesting album with a lot of promise.

Echo Bloom are Kyle Evans’ band, built around his songwriting and the vision for his music. This latest release is their fourth studio album and the backstory to these albums is an interesting one.  Evans’ first album, ‘Jubilee’, was a collection of songs as character studies. He decided to take the three songs he thought were the best – ‘The Prostitute’, ‘The Businessman’ and ‘The English Teacher’ and write whole albums around them. Each would be colour coded – ‘Blue’, built around ‘The Prostitute’ would be a folk-oriented album; ‘Red’, featuring ‘The Businessman’, would be country/rock and the latest, ‘Green’, centered around ‘The English Teacher’ would be more of a classic pop album. On listening to ‘Green’ you can hear the pop approach, though there are still elements of country and folk in the mix, giving it a strong Americana identity.

All the songs have a good narrative strength to them and you can tell that Evans’ enjoys observing people and building songs around them; many of the songs on this recording carry names in their title – ‘Song for Steven’, ‘Anthony’, ‘Cecil De Mille’. The start of this album is very good indeed and by the end of track three you find yourself wondering why you haven’t encountered them before and why Kyle Evans isn’t a major name in songwriting! But then the downturn starts and the songs start to sound a little weaker and then, when you hear the same lyric in two different tracks, you start to wonder if Evans’ isn’t running out of ideas. Obviously all writers will repeat themselves from time to time but a line like “Steven I hope we become the people we should be, eventually”, from ‘Song for Steven’ is quite a stand out line. When you hear it again, two songs later, as “You promise someday we will be the people we should be” from the Springsteen-esque ‘Fire in Your Eyes’ it sticks out like a sore thumb.

Listening to ‘Green’ and taking time to look at the band’s website and read their publicity, you realise that this is very much about Evans’ music and how he wants it interpreted. The fact is that, after a very strong start, the album really doesn’t sustain your interest as the songs start to sound a little samey and the album appears to have been front-loaded with the best songs. Ironically, ‘The English Teacher’, the starting point for this recording, is one of the weaker songs. Kyle Evans obviously has a lot of talent but he might need to start collaborating more with others to give some of his songs an added dimension and keep them all at the level of the earlier tracks on the album.

‘Green’ is an album of two parts; when it is good it is very good – but that strength makes the weaker tracks on this recording sound a little ordinary sometimes. Goffin and King, Lennon and McCartney, Difford and Tilbrook – there’s a reason why writers collaborate and this is an album that might’ve benefited from a wider perspective.

An album that starts well but can’t maintain the momentum.