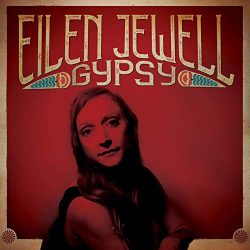 Press releases can be a little overblown at times but in listening to Eilen Jewell’s new release ‘Gypsy’ I would agree with one thing: it’s varied. The subject matter is widespread and the arrangements, instrumentation and vocals vary from track to track – which makes for interesting listening. It’s the eighth studio recording in Jewell’s career and her first of original material since 2015.

The first track ‘Crawl’ starts off with a driving beat with some neat violin playing; guitar and violin being the dominant sounds on this disc. The lyric ponders a confused sense of being and the dichotomy between adventure and certainty.  Do I want to be settled or travelling? Do I want company or solitude?

The second track ‘Miles to Go’ slows things down and is the standout track. The musical accompaniment complements the tale of a weary soul contemplating the unrequited love of another and plenty of ‘These hard times’.  The sense of unattained personal, emotional and political goals runs through the entire lyrical content.

‘You Cared Enough to Lie’ is a non-original and its ambiguous lyric, ‘If you never really loved me / You cared enough to lie’ gives a measure of uncertainty as to the nature of the relationship.  What was the lie?  Many a good song leaves the listener guessing.

This brings us to the probable heart of the album – a track you may already have come across on the AUK site.  ‘79 Cents’ skewers the lot of women, especially those who are not white, still lagging behind in the world of work as well as in almost every other aspect of their lives. It’s a catchy tune and chorus but somehow the rather light-hearted musical treatment does not chime with the gravity of the subject. It’s undoubtedly a clever lyric but seems reluctant to use the word pussy – I thought the president had given it his oval office seal of approval?  The accompaniment feels a little leaden – or maybe emphatic – depending on your view. It finishes with the feel of a New Orleans marching band, which seems like a misstep.  There is better fare elsewhere on this album however laudable the sentiment.

The other track that doesn’t sit quite right is ‘Working Hard for Your Love’ which smacks somewhat of subjugation rather than partnership in the relationship that it examines. It’s a dark tale reminiscent of Lucinda Williams who can sometimes take a similar stance (though she is equally capable of ripping right through unfaithfulness and betrayal). Sentiments such as ‘Slave for Your Love’  – ‘Want to do What’s Right for You’ –  ‘I’m on Your Chain Gang in the Snow and Rain’, don’t sit too well. Perhaps the song is a reflection on a state of mind without necessarily advocating it? Randy Newman spent half his career doing just that. Unfortunately lyrics such as these have popped up in several reviews lately which makes it hard to be sure.  Chain gangs – no thanks!

Those reservations aside, there is plenty to keep you entertained and engaged here.  ‘Who Else but You’, takes a very different tack, describing a parting of ways but not an end to love, ‘There never was a better friend than you’. It’s my second favourite track, with a haunting, dramatic feel.

Everything rounds off with the guitar and voice of ‘Fear’, and the suggestion that we make sure that we don’t give that kind of negativity too much oxygen. ‘Don’t take fear to be your guide / Just look him in the eye’.

This is a likeable, worthwhile album sprinkled with variety.  If there are one or two tracks and sentiments that are somewhat ambiguous, there is enough elsewhere that makes this well worth a listen.

A varied and interesting set from an established artist