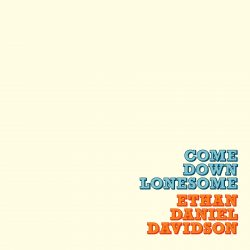 Ethan Daniel Davidson’s latest album, ‘Come Down Lonesome’ is somewhere between his 8th and 11th LP (depending what you consider to be an actual LP) in a recording career stretching back to 1999. His output may have slowed somewhat in recent years with only three records since 2005 but it remains relatively stylistically consistent, drawing on standard country and folk-tinged Americana influences with washes of jazz, bluegrass and even vaudeville.

Ok, so far so predictable. There’s a lot of artists out there who could fit that prosaic description and in so many ways he’s just one more. However it is hard to shake the sense that there is something more going on here that warrants further exploration. The ‘missing years’ in his discography and the backstory that goes with them suggests musical success or even expression may not be his primary driving force. And they may hold a clue as to the new(er) sounds of this latest record.

Lots of people have been making distracted, even fraught records of late and Davidson’s atmospheric, almost desperate sounding ‘Come Down Lonesome’ fits that bag, feeling like it is about to fall apart at any moment; only being held together by the slowest, most minimal of musical arrangements. This tone differs from his previous work and may well reflect the circumstances into which the LP is being released but it also has more substance than it would seem to imply. It is fashioned from richer, more powerful ingredients.

Listening to the record it is impossible not to recall that ‘brainstorming’ (well it was 20 years ago) meeting held at ‘slow-core’ HQ in Detroit where genre originators the two Marks, Eitzel and Kozolek, Cat Power and Hope Sandoval were joined by fringe protagonists Nina Nastasia, and Mark III (Lanegan) to explore why none of them had ever had the level of success they felt they deserved. Whilst there was unanimous agreement that they all loved their ‘stuff’ there was also a realisation that if only they could mine the core essences of each of them and combine these into something slower, doubly minimalist and possibly even more fed up it could be the edge they needed.

The mood of the meeting lifted further and became almost animated when a passing Tom Waits pointed out if they would ditch the country / Americana influences and combine their intensified essences with a kind of rough-edged found-sound original folk-blues thing instead it could prove to be the final piece of the cash-cow jigsaw. With creative juices now flowing freely, it was quickly established that the production would have to be pared right back and arrangements kept as simple as possible. With the final flourish capturing the authenticity of the project by including covers of a handful of original tunes by artists such as Blind Reverend Gary Davis, Mississippi John Hurt, Cowboy Joe Babcock, hell, even Dylan why not.

Nearly 20 years later it remains one of recent music’s most enduring mysteries why none of those present at the meeting that day followed the template developed. We just have to be grateful that this musical blueprint somehow fell into Ethan Daniel Davidson’s hands and his new record is as accurate a reflection of the imagined music as it is possible to get. Part chamber-folk, part gothic country-blues the sound is earthy, dark and resonant with flashes of sonic weirdness that lend the low-key tunes some ethereal intrigue and emotional weight. He delivers them with a voice that keeps suggesting at something that never quite emerges – we can sense an acutely rooted longing for something beyond the words of both the covers and his own songs.

It is hard to shake the feeling though that this a world of someone else’s making rather than Davidson’s and this stops us from really living in it, as a record of this type should demand we do.