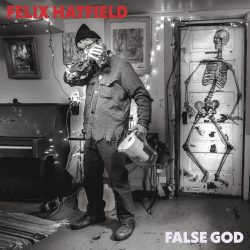 Felix Hatfield is the type of artistic polymath that you don’t meet every day. His creative works of madcap art and surrealist music over the last 25 years are unconstrained by genre and comprise of silent films, cardboard characters, junk robots and music that has ranged from jug bands to punk bands. His latest work ‘False God’ has been recorded in “The Batfield Library”, his basement studio in Portland with the help of some passing friends.

Songwriting clearly appeals to his creative juices with the songs on ‘False God’ having been selected as his “greatest hits” from a collection of about 500 original works. “Songwriting is one of the most mysterious and magical forms of art. It’s like having a blank piece of paper and some crayons. You don’t have to be the best, you just have to be brave enough to explore and bold enough to court the unknown“.

His previous release ‘Boundaries’ combined vocals with acoustic guitar and was redolent of early folk-blues, the realm of the road-weary travelling musician. His latest work has expanded to include friends with eclectic instruments, resulting in a sound that is somewhat inevitably comparable to the work of a certain Captain Beefheart. This release explores the basic premise of all his works “Don’t conform. Beware and be aware. Color outside the lines, join the boredom patrol, listen to that voice and trust those visions”.

The title track ‘False God’ most probably comments on the combination of politics and religion that exists in America, but the ambiguity of the meaning of his songwriting is a delight throughout the album. ‘Train to London’ has a hazy, meandering folk feel combined with the ruminating vocals of Shane Mcgowan. ‘Nobody for Me’ is disjointed ragtime, ‘Secret Society (Live)‘ is a boisterous call and response including “Skull and Bones” and “Montgomery Burns” which transitions immediately to ‘That Kiss’, a frail and melancholy sounding love duet.

Good art does not equate to widespread recognition or commercial success. There is no possibility that this fine collection of works will achieve an iota of the recognition it arguably deserves, but for those who chance upon this it will be both impactful and joyous. To quote Kurt Vonnegut Jr “The arts are not a way to make a living. They are a very human way of making life more bearable. Practising an art, no matter how well or badly, is a way to make your soul grow”. This album is an acknowledgement of the continued growth of Felix Hatfield.