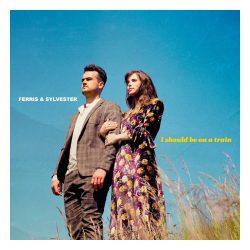 Ferris & Sylvester have managed to be around on the folk scene around for years while not having a single album to their name. With twelveish singles and now two EPs, appetite for their particular brand of soulful folk is thoroughly whetted. Ferris & Sylvester are a duo from Streatham who have been singing their way into festival revellers’ hearts since BBC Introducing introduced them to the scene in 2018. Their close harmonies and gentle blues-tinged guitars sound familiar and well-worn, but this duo is unusual in that both Ferris & Sylvester have voices like squeezy honey in a truckstop diner’s booth. They sing about Streatham as if it were somewhere just off Route 66!

The title track ‘I Should Be On a Train’ harks back to the crooning soul sisters of the 60s who suggested that maybe staying at their lover’s house was not particularly sensible. The age-old story of “accidentally” staying over. This is followed by ‘Knock You Down’, a curious song about childhood that uses imagery of knights and geometry to reflect the innocence of new love.
The third track ‘Everyone is Home’ has the gloriously uplifting lyric “Everyone is lonely, everyone is brave” and builds up to an epic sounding, stadium noise, with a surprise guitar solo that reminds us that Ferris & Sylvester are from the same England that contained the Rolling Stones and Led Zepellin.
The EP highlight is ‘Good Man’, a real stand-out track with lilting middle-eastern melodies, dark guitar evoking Jack White, and deeply personal lyrics that describe the parental pressures of modern and traditional morality “do as they say and it will make you a man”. It is worth a listen for this song alone.
‘I Should Be on a Train’ ends with a remarkable cover of  The Beatles ‘With a Little Help From My Friends’, thus ending on a raucous high, proving it is a well-thought-out compendium of tracks, not a mere collection of singles.
Ferris & Sylvester · I Should Be On A Train