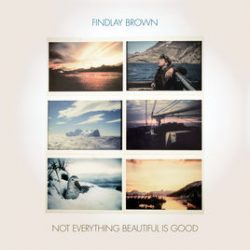 Ambient/Psychedelic Americana is a genre not populated by many artists, but Findlay Brown continues to cut a groove that is somewhat idiosyncratic and to back this up, he even manages to sing about lovers living in separate dimensions who can only meet by travelling through a black hole. ‘Seven Hours’ definitely falls into the quirky storyline category. Don’t let this put you off though, there is certain poetic beauty to his fourth album ‘Not Everything Beautiful is Good’ and it continues in a similar vein to his last album ‘Slow Light’ as he explores many aspects of love, albeit with a somewhat melancholic tone as he searches for, in his own words, the “good wolf” in himself instead of the more self-destructive “bad wolf”.

The first track ‘Call it What you Want’, an unambiguous song about unconditional love, sets the scene for rest of the album with lyrics that leave you in no doubt as to the meaning “You’ve been my great escape out of this world into the emptiness, nothing can stop me now you’re by my side, won’t let my love for you die”.

The love theme continues through the album and it even includes an ambient instrumental ‘In Search of the Golden Flower‘ which wouldn’t have been out of place on Brian Eno’s 2004 classic (at least in some eyes), ‘Music for Airports’

Brown’s backstory has taken him from his home in Yorkshire, to a spell living in Brooklyn before recently moving to a rural retreat in Denmark,  where, in addition playing guitar and keyboard himself, he has teamed up with local musicians Bo Rande, who supplies the album with a subtle influx of horns – along with local percussionists Fridolin Nordsø and Morten Lund and David Rossi – of Goldfrapp and Coldplay fame – even makes an appearance on strings, while the mixing and producing duties have fallen to Tor Bach Kristensen.

This environmental change from the hustle and bustle of New York to pastoral Denmark certainly seems to have provided Brown with a new perspective and the lead single, and possibly best track ‘Home’, sees Brown open up with some very personal lyrics about his family and his son, “In my heart you’ll always stay.  We get stronger every day.  The world keeps turning as we watch him grow.”  Every parent will recognise the strength and depth of those thoughts and feelings.

This has been a hard album to review in many ways.  It certainly grows on you and there is a lot of good music on ‘Not Everything Beautiful is Good’ and in fact there are not really any poor or bad tracks at all.  Therein lies the challenge though, as there isn’t a truly memorable or standout piece and that leads to a certain frustration as you just will this album to jump into a higher gear and for Brown to sing with greater passion and emotion.

Despite some clever lyrics and some really good playing, it just lacks a final spark that would turn it from a fine album into a really great one.  It’s like going out to a good restaurant expecting a really great meal only to leave later feeling like you’ve only eaten hors d’oeuvres.  Nice hors d’oeuvres but still only hors d’oeuvres!

Don’t pass it by though.  It really is very good.  It just feels as if it could have been great.

A tantalising album that just needs an occasional shot of adrenaline

About Jim Finnie 58 Articles
Resident of the frozen NE of Scotland, with a penchant for climbing high mountains and exploring crazy countries that others avoid. I also sorta like music.