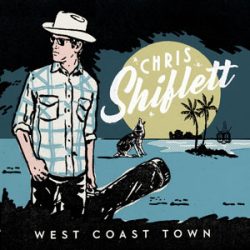 “West Coast Town” the new solo album from Chris Shiflett, will be released on 14th April on SideOneDummy Records. Although he’s known as the Foo Fighters’ lead guitarist, Chris’s solo country work has also gained him recognition on the alt-country scene, where “his signature vocals and killer guitar work serve up a heady brew of raw barroom honky tonk, hi-octane rockabilly, and here-and-now Americana.” And we like a bit of here and now americana.

Chris interviewed Grammy Award-winning producer Dave Cobb for his weekly podcast at Nashville’s RCA Studio A (shortly after Cobb moved his recording operations into the room). There, amidst vintage gear and the ghosts of country music’s finest, Cobb and Shiflett formed a genuine friendship. “When I left the studio,” Chris remembers, “I thought, I have to make a record with that dude. I was already a big fan of the records Cobb produces, and his setup was just so amazing.”

Here’s the track listing plus the first track to be released from the new record.