Darden Smith should’ve been a big star. Blessed with an ability to write great songs and being a rangy, good looking Texan it’s hard to believe that his future as a top singer songwriter wasn’t assured. Sometimes the Universe has other plans, it seems.

Born in Brenham, Texas in 1962, Smith showed an early affinity with music, spurred on by singing in the church choir and accompanying his parents to local dance nights. He got his first guitar before he was nine years old and was writing his first songs by the age of ten. When he was in his early teens the family moved to the Houston suburbs and Smith was exposed to wider musical influences, especially great Texan song writers like Townes Van Zandt and Guy Clark. Moving to Austin to attend college he quickly got involved with the local music scene, becoming a regular performer in smaller Austin venues like the Waterloo Ice House and the Alamo Lounge. 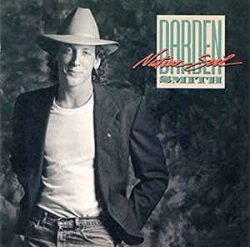 It was an assured debut that boasted Nancy Griffith singing harmony vocals on the track ‘Two Dollar Novels’ and some guy called Lyle Lovett singing backing on no less than five of the albums tracks. It opens with one of my favourite Smith compositions, ‘Bus Stop Bench’, which highlights his clever way with words –

“Now this Bus Stop bench is cold hard steel still wet from this morning’s rain / And a bus stop bench ain’t a bad place to be when you’ve got a pocket full of change / I got four nickels, got seven dimes, one more I’d have me a buck / I had me a woman, she took all my dough, now things are nip and tuck / Oh, I’m a lucky man. Oh-oh, lord I am a lucky man / Bus rolls by about every twenty minutes / The next time it rolls around I’m going to get in it”.

Off the back of this impressive debut album Smith signed a publishing deal with DJM and a record deal with Epic Records, resulting in his first mainstream release with 1988’s ‘Darden Smith’, which actually included a number of tracks that had been on ‘Native Soil’. The album gave him two minor hits on the country music singles charts but, perhaps more importantly, it was instrumental in getting Ensign Records boss, Nigel Grainge, to arrange a meeting between Boo Hewerdine, then frontman for The Bible, and Darden Smith on the grounds that he thought they might write well together. In four days they’d turned out eight songs, including the album’s single ‘All I Want is Everything’, and signed a deal with Ensign/Chrysalis that produced the 1989 album ‘Evidence’. 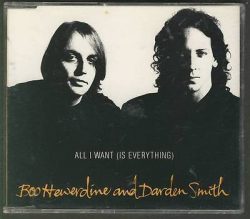 The album was well received by the critics but didn’t sell in great numbers and remains a one off, though Smith and Hewerdine have subsequently toured together, doing a 30th anniversary tour for the album in 2019. ‘Evidence’ did help to introduce Smith to British audiences and steer Hewerdine towards a solo career but it wasn’t the commercial success that either had hoped for, though there are a number of excellent songs on the album. Had it come out in today’s musical environment you have to think it would’ve made a lot more impact – the late ’80s, with its accent on dance music and synth pop, probably wasn’t the best decade for a couple of singer songwriters crafting lyrically complex, acoustically driven songs!

Following ‘Evidence’, Smith’s next two albums were released on Columbia Records and are probably the most commercially successful of his career: ‘Trouble No More’ in 1990 and, three years later, ‘Little Victories’,  which gave him a chart hit with the single ‘Loving Arms’. Then something seems to have shifted in the way Smith viewed his life and his work. In 1995 he left Columbia Records and would not record again until 2002, when he released the first of three albums (‘Sunflower’, 2002; ‘Circo’, 2004, ‘Field of Crows’, 2005) for Nashville based independent label Dualtone Records. From this point on Smith would only record for independent labels. This period also saw a change in the focus of his work. Up to this point Smith had concentrated on writing, performing and recording – the standard life of a working musician – but in 2003 Smith founded the Be An Artist programme, the first of his collaborative songwriting projects designed to bring arts and creativity into community settings. The Be An Artist project focused on working with young people and successfully created projects involving homeless youngsters in his native America along with programmes for HIV/AIDS sufferers in Africa and for attempts to bridge the Palestinian/Israeli divide in the Middle East.

Then, in 2012, in collaboration with educational programmer Mary Judd, Smith created Songwriting With Soldiers, a non-profit organisation that looks to pair both veterans and service personnel on active duty with professional songwriters in order to help them write songs about their experiences. The programme is about using creativity, and especially songwriting, to help individuals come to terms with their experiences and to better face their future and life after the military. Now in its 8th year the programme continues to attract notable songwriters to work and collaborate on the workshops and retreats that Songwriting for Soldiers organises and it has produced a number of songs that have been recorded by major artists, including Willie Nelson, Garth Brooks, Keith Urban, Delbert McClinton and many more.

Darden Smith continues to write songs and to record them. He’s now notched up 19 albums and he continues to perform and to tour extensively – but he’s also learned that you can give up the battle for commercial recognition and still carve a fascinating and rewarding career working outside the mainstream music business. Ironically, Smith seems likely to be remembered long after many more commercially successful artists are forgotten. The people he’s worked with through his collaborative workshops and songwriting programmes – people who didn’t believe they had any creativity and had nothing to say – are unlikely to forget him anytime soon. His has been, and continues to be, a fascinating career, even if he never found the personal fame his songwriting talents deserved.