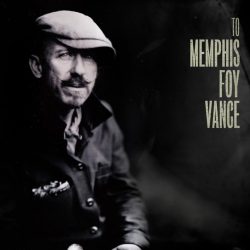 Foy Vance is from Northern Ireland, a native of Bangor, near Belfast. He recorded and co-produced, with Matt Ross-Sprang, this album, literally in Memphis. You can guess where the equally interesting companion album was recorded by its title, ‘From Muscle Shoals.’ Obviously, he is at home musically in Tennessee and Alabama! But beyond that, here is an insight into Foy’s ability to conceptualise clearly, musical and lyrical ideas. The strong appeal of this album lies in its ideas and its music.

The first track ‘I Was Born’ is like a rousing call to listen, because Foy’s voice is one of authority: his reference to being born “in the Vale of Angels” in Bangor, “To my father Hugh and my mother Anna Jean,” in the days when he “walked in the ways of Jesus.” Moving personal details, often, with biblical references: “Hell beneath us” and a soulful organ playing in the background. A very effective starter, rather akin to a mission meeting.

The variety of subject material in the songs, here, is indicative of Foy’s skill at songwriting. ‘Only the Artist,’ the second track, is an essay in this art, painting a haunting portrait in a love song, watching a loved one painting a portrait, “scanning the corners of the canvas,” being told that “Love is a work of art.” And realising that a true understanding is something “only the artist could know!” And here, that something is epitomised in the simple, so effective chorus “Oo-oo-oo-oo” persuasive, maintained until the very end. Listen – every song in this collection could stand up to such close scrutiny.

Notice, in particular, Foy’s soaring voice at times, his effective and sometimes unexpected use of half-rhyme: “Now that I’m sober, I think of October,” and his use of couplets: “Malibu Jane, Malibu Jane/ When will I see your face again?”

At the end of ‘The Strong Hand’ simplicity works again. The repeated title and the bass line compound the message of the song: “Sometimes it takes a strong hand/ Of a kind-hearted woman.”

‘Wind Blows Chloe’ is a contender for the singalong song of the moment. Note the beauty of some of the lines: “There’s a jackdaw cawing in the northern sky.” And join in with “We gotta go where the wind blows, Chloe.” With the whoops and the hollers.

The last track, ‘We’re Already in Heaven’ is the perfect ending. With a gentle guitar introduction, we are told: “One day we will dissipate/ Reassign our molecules and float away.” And there is a message here, a call to listen carefully to the startling and thought-provoking last words, with a reminder of Ecclesiastes, (“To everything there is a season”) and the reassurance that “We’re already in the heavens.”

Foy Vance has more than established himself with this album. Get hold of ‘To Memphis’ and try to catch him on tour on this side of the Atlantic.