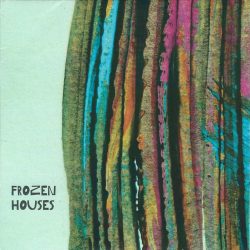 This is the eponymous debut album from Cornwall based singer/songwriter Alex Hill, aka ‘Frozen Houses’. It’s an interesting package, full of confidently delivered songs and some good musicianship but it is something of a strange confection. Consisting of eight self-written tracks the album definitely has an appeal. Frozen Houses is ably assisted by Ashley Height (guitar/harmony vocals), Lucy Hill (Little Lapin) on additional vocals and the assured drumming of Harry Harding (William the Conqueror and Yola Carter) and, for a debut album, this shows a deft touch in the studio.

The album gets underway with the shimmering guitar intro of “Hey Leanne”, a languid, laid back love song that’s easy to listen to without making any real demands from the audience. It’s relaxed, almost tropical sounding and if this is a sound you can relate to you’re in luck – because it’s pretty much the sound of the whole album.

What ‘Frozen Houses’, the album and the singer, lack is bite. All eight of these tracks are very pleasant to listen to and, taken individually, there are some very good songs here; but, gathered all together on the same album, the overall impression is that the songs are really quite bland. And that’s unfortunate because it’s not actually true. There are some clever, even witty lyrics, mostly rooted in the everyday, almost little kitchen sink dramas when you start listening out for them – “Heading down the B roads, dodging tickets in the laybys. Beyond the tax and the tarmac how far do those Euros go”, from third track ‘Tax & Tarmac’, or the sly dig in ‘Why So Serious’ – “Getting tense until somebody farted”. There’s humour and good observation in these songs but, invariably, they’re wrapped up in rather polite melodies and arrangements. Second track ‘Road Aroma’ kicks off with quite bluesy sounding guitar work; the riff is good but you want the track to kick on from there and it really doesn’t, it just falls back into that same languid lope that infuses the album. It’s not at all unpleasant but it does mean that, when all these tracks are gathered together, there’s a tendency to dismiss the album as background music.

‘Frozen Houses’, the artist, seems to be very well received within Cornwall and the South West and there’s a suspicion that his is very much music of the area – it’s sunny and easy going, with references to beaches, camper vans and road trips. Putting the lyrics aside there’s a slightly hippy feel to these songs, reminiscent of early Donovan, perhaps a more upbeat Nick Drake or a less forthright Jack Johnson. As an album, it really needs more variety and the more you listen to the album the more that is the overall impression you’re left with  – none of the songs are bad but putting them all together in one collection really doesn’t do them any favours.

Good songs that don’t offer enough variety when gathered as an album.