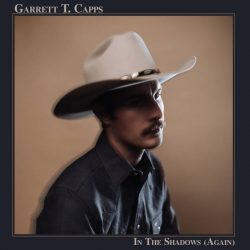 San Antonio’s Garrett T. Capps is a man whose time has come – sort of.  Having spent a decade in and around the Texas roots-rock-country music scene, his stomping track (called appropriately enough) ‘Born in San Antone’ from his first album ‘Y Los Lonely Hipsters’  featured in the US TV show ‘Billions.’ In these days of dwindling hard copy sales, featuring on any TV show, or better still on a game soundtrack is like being ‘top of the charts’ – right? And yet, look on YouTube and you might find the track has not had as many views as you might expect. Fame can be fleeting and Warhol might have been generous when he predicted we would all get our 15 minutes. Warhol’s timekeeping was for an analogue age.  Will Capps get another break like that? Could it be that ‘Back in the Shadows (Again)’ in some way references that idea? Indistinct under his Stetson, the slightly fuzzy sepia backed cover photo is hardly the depiction of this year’s rising star.

Fear not though, Capps seems to know what he is doing. And the quintessence of that is a drive for authenticity. Capps is still going to conquer the world, but he will do it the old-fashioned way – honing his talent into something the public will respect and enjoy through the application of sheer hard work. He is cut from a traditional cloth, but adorned with a few surprises. His music is heavy on lap steel but shrouded in washing keys and echoing, phasing guitar that make sense of the soubriquet ‘space country’. It is both familiar and original and played and sung with a passion that is both earnest and yet, at the same time seems to know when to smile. Right from the off ‘Born into a Ballroom’ contrasts his country twang against an atmospheric acoustic and synth backdrop before ‘Go Home’ drags even the most reluctant toe-tapper towards the dance floor. The title track doesn’t exactly support the fifteen-minutes-of-fame theory, but hey there is no need to intellectualise when that lap-steel is churning and swirling is such a delicious way.

‘The Interstate Waltz’ continues the high standard delivered with a punkish devil-may-care snarl. If Shane McGowan came from Texas he may well have sounded like this in his heyday. ‘Here Right Now’ delivers six minutes of propulsive country rock; this is might fine stuff. Perhaps the most curious track is the 50 second instrumental ‘Can You Harness The Light’ which sounds like ‘Hotel California’ filtered through ‘Wish You Were Here’ – a vindication of the ‘space country’ sound maybe, but also a slight waste; this could have been the foundation of another fine tune. As it is, it is perhaps best seen as an extended intro to the album closer ‘Troubles’ Callin’’ which provides 11 minutes 10 seconds of suitably epic album denouement. The wafty, echoey guitar we have become used to builds to a cacophonous vortex which seems to end just shy of 10 minutes only for a long held synth note to fill the void, overlain with – what is that? Marching feet? A helicopter? Birds tweeting or just electronic noise? And then, just two notes plucked on an acoustic guitar sign us out. Perhaps it is Garrett retreating into the shadows again. Let us hope it is only to continue writing music like this. And, Garrett, please come play the UK.

Familiar but original, intense but humorous, fans of Sturgill Simpson will want to fill their boots with this