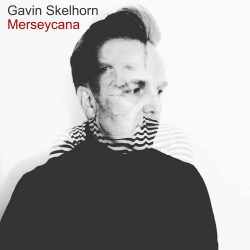 Nashville may be known as the Music City of the US, but arguably the title of the UK’s own city most famed for its musical heritage could go to Liverpool (the bonus fact that AUK is based there obviously only helps bolster such a claim). Merseyside act Gavin Skelhorn is building a bridge between Nashville and Liverpool with his new album – aptly titled after his own brand of Americana – ‘Merseycana’.

“Stay with me / Always with me / Help and guide me / Through the night / The dark and lonely night,” sings Skelhorn on the opening track ‘Stay With Me’, and from the outset, his geographical roots are instantly recognisable. His voice contains a distinct dose of Mersey (somewhat similar in tone to La’s frontman Lee Mavers); but he never masks his accent, and by embracing it he helps give character to songs where such a voice isn’t necessarily the expected one. ‘Let Me Let You Go’ is the next song, and that too shows his roots with echoes of The Beatles – in particular Paul McCartney – coming through. But there are transatlantic influences showing too, with a real Elvis Presley vocal wobble particularly when he sings, “Oh what to do / I’m stuck on you”.

‘You Do Something To Me’ sounds like clear cut Randy Travis or George Strait style country – but with a Scouse accent. “Cos you did something to me / If you look in my eyes / You will find that you are there,” Skelhorn tells us, quite broken at the prospect of being without the one he loves. ‘Raining Stones’ continues with a very similar sound, and it’s comforting in its nostalgic melody and lyrics of heartbreak (“Loves a dealer / She’s a stealer / And once you get it / Can’t forget it / And it’s raining stones”).

‘Love Theme’ is a standout track, with an impressive vocal performance (Skelhorn shows some great range especially when he sings, “Without you here by my side,” with a tangible level of pain). “Every time I see a movie / It just reminds me / Of how we used to be,” have to be the sharpest lines on the record. There are some welcome strings on the track too, along with some fantastic backing vocals near the end of the tune. ‘Show Me The Way’ has an interesting echoey quality, almost verging on an 80s power ballad territory at times.

Skelhorn has played Billy Fury in a touring stage show in the past, and that influence comes through heavily on ‘We Cry Sometimes’. “Don’t think of what they said / Find someone else instead / I know that it ain’t right / And you fight with all your might / And your losing your mind / It’s a waste of time / Get on with your life,” Skelhorn imparts to us, recommending the heart over head route. ‘King For The Evening’ is another nostalgia trip, but this time a more energetic 50s rockabilly affair about the lighter topic of a night out on the town (“Well come on baby don’t you worry / Look in my eyes I’ll treat you right / We’ll go dancing in the old town / Wake on the beach in morning light”).

‘Coffee’ and ‘The Winter Song’ have a similar country twang emanating throughout, the former a song about wanting to reach out again to an old flame, and the later about a woman so luminance that she melts the winter chill away. ‘Sippin’ on the Wine’ is a bouncy acoustic episode that plays us out, reminding us that no matter how great life looks from the outside, it’s nothing if you’re not at peace on the inside (“I’m staring at the clouds / And I’m as blue as the sky / And I miss you oh my darling / So I’m sipping on the wine”).

Merging the sounds of Nashville with those of Liverpool was always going to be a challenge, but it can’t be said that Skelhorn doesn’t give it his damnedest. While ‘Merseycana’ – a little uneven and scattergun its approach, with lyrics not always giving the rich stories one may expect from an Americana inspired album – may not light a match under the current Liverpool music scene, the few sparks it gives off could help start something.