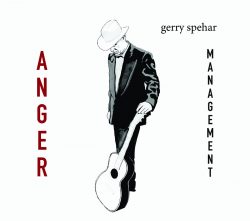 ite the title of this excellent record Gerry Spehar is clearly a very angry man, the subject of his ire being mainly about a certain US President. However, this is not a one dimensional piece but rather a protest record in the grand tradition of years gone by with anti-war sentiment and concern for the downtrodden.  A little background for anyone who is not familiar with Spehar – he is from Colorado and started performing in the 1970’s, although having a family meant that financial necessity drove him to hold down a non-musical job for a while before returning to what is his musical calling.  This album of 13 tracks is co-produced by Spehar and Paul Lacques of I See Hawks In L.A. and backed up by most of that band.

Four of the songs deal specifically with Trump, the opening track, ‘Thank You Donald’ being written from the viewpoint of one who is energised as a result of the election of Trump to challenge the political situation in the USA.  ‘Bitch Heaven’ is apparently based on Woody Guthrie’s real-life encounter with Trump’s father and at the pearly gates reference to the background of the two protagonists results in only Woody getting a pass to enter. ‘Freedom to Grab’ is a very clever piece dealing with the misogynistic tendencies of said President and ‘What Would Jesus Do?’ is probably the best piece of satire on show written from the viewpoint of the type of bigots who use religion to further their own views with questions such as “would Jesus build a wall, raise taxes and turn away the needy…oh and of course vote for Trump?”

All of the other tracks are excellent but worth special mention is ‘Greed’ which has a Latin groove with clear observation on what makes the world go round, ‘Pearl Harbor’ which asks the question of why wars still rage and ‘Son of an Immigrant’ which makes the point that most people – especially in the USA  – are immigrants. This is not a record that will resonate with any right wing Republican sympathisers out there, but for everyone else, and thankfully there are many, this is a cracking protest album for the 21st century.

A protest album for the modern age.