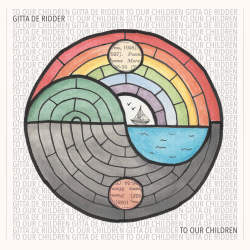 The human experience is something that undoubtedly plays a large role in any songwriter’s output. Songs that explore one’s own sense of self, belonging, culture, and identity have been labelled as some of the greatest. From Leonard Cohen’s ‘Bird on the Wire’ to Bob Dylan’s ‘A Hard Rain’s A-Gonna Fall’, they are songs that transcend musical trends, top 40 lists and become timeless. It is always exciting to see a lesser-known artist take on these subjects.

Setting out to write an album that falls into these parameters is no easy task, and is something that Netherlander Gitta de Ridder didn’t take lightly. The conception of ‘To Our Children’ took place during an eight-month journey across Europe. Along the way she collected stories and distilled them into her own brand of folk music, which retains an unapologetic pop edge throughout.

Songs such as, ‘Like a Kite Released’ paint a very sweet, light picture of the innocence of childhood, which is accompanied by equally uplifting guitar motif and backing vocals. This feeling is also carried through to the next track ‘Man of the Light’. Whereas songs such as ‘The Clearing’ and ‘Hypothetical You and I’ provide the album with some much-needed brooding, moody moments which are carried by the sultry guitar of Paco Seco. A special mention for Ridder’s Bjork-esk performance on this track, a fantastic display of her vocal talent.

The album provides the listener with individually well-crafted stories, with a strong concept throughout. However, the production techniques which feature in the album can make the record feel disjointed at times. The first two tracks open with clips of nature, or café conversations, and the final song ‘Sing a Song, Sing Along’, opens with the excited chatter of the featured Burrow Hedges Children’s Choir. The way these recordings are woven into the music makes for an interesting listen, more frequent use of this technique could’ve helped the album make a greater first impression.  Nevertheless, a great exhibit of Gitta de Ridder’s talent and hard work, which succeeds in exploring her own heritage, experience, and psyche.

Musical stories about the human experience