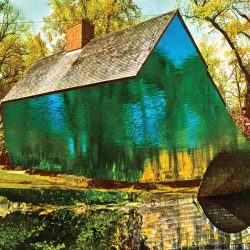 Having a vinyl LP to review is a great treat, but such subjective fascinations won’t cloud any impartiality hereabouts. Much. Grant Earl Lavelly as a musical whole, pretty much sums up ‘brooding Americana’. An Ohio native, now working on his craft in the Joshua Tree Desert, complete with long beard and dishevelled clothing fitting of his wild abode. He’s described as a Gothic Gene Clark or a desert dwelling Will Oldham. Both of which seem appropriate.

From Lavalley Below finds the man’s slow baritone voice deliberating over suitably dark material. Opener The In Betweens sets the tone, restrained acoustic picking preludes the tale of a chemically addicted soul struggling to make sense of the world around him. Dark Love stands out – self-explanatory by its title. Lavalley opines about he and his partners’ perhaps unspeakable degree of intimacy. Call Of The Wild opens up side two of the vinyl(!). It’s probably the prettiest track on the record, a paean to the man’s desert home with epic night skies and sunrises. A suitably understated cover of Neil Young’s Don’t Let It Get You Down follows soon after. It sits very nicely with Lavalley’s songs in its depiction of troubled times all around. The final track Dungeon Waltz is a doozie. An undefined darkness and creeping mortality is replete with clanging chains and New Orleans style funereal brass.

Bleak and foreboding, the kind of music you’d want and expect from a desert-dwelling eccentric.