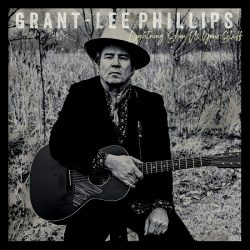 Grant Lee Phillips has been a critic’s favourite ever since the days of Grant Lee Buffalo in the ‘90s, and is known for his sweet and soulful vocals and excellent songwriting. However, this acclaim has not translated into significant commercial success. With ‘Lightning Show Us Your Stuff’, his tenth album, this may be about to change. While the album fits seamlessly into Grant Lee Phillips’ discography, the quality of the album and songwriting is just that little bit better, just a touch more relaxed and with just enough subtlety to make this probably his best album. Grant Lee Phillips, who is of Indian descent, got the idea for the title from “The words of my daughter, as she thrust a manzanita branch toward the night sky. Kids being kids, I figured….then I heard the thunderclap.”.

‘Lightning Show Us Your Stuff’ was self-produced by Grant Lee Phillips in Los Angeles and features him on vocals, guitar, piano and organ. A key part of the album’s success is down to the real band feel of the supporting musicians who include husband and wife rhythm section Jay Bellerose and Jennifer Condos, steel guitarist Eric Haywood and horn player Danny T. Levin. The album was recorded live in the studio and the subtlety of the musicians, who have played with nearly everyone in the music business from Wilco, Bruce Springsteen to Ray LaMontagne and The Jayhawks, give perfect support to an impressive collection of songs. Jay Bellerose’s drum work is just a joy to hear and at times recalls the feel drumming of Levon Helm’s work with The Band. The euphonium, trombone and cornet of Danny T Levin add wispish and varied textures to some songs. The album’s length of thirty-eight minutes adds to the overall classic feel of the album with no filler tracks adding to the overall length.

The collection of songs was written by Grant Lee Phillips to reflect on “….the quiet lives of people who are wrestling to hang on, trying to retain dignity, fighting back forces beyond their control,” and Phillips added, “I’m not interested in pinning the songs down or reducing their mystery. I’m attempting to capture a sliver of time.”. The album opens with 56-year-old Phillips defiantly saying ‘I Ain’t Done Yet’ and proclaiming he has “more dreaming to do” punctuated by the horns. Acoustic and steel guitar are to the fore as  Phillips shows his questioning nature on ‘Drawing The Head’. ‘Lowest Low’ was the lead single from the album  and is a beautiful and gentle song that allows Phillips’ vocals to shine. The oldest song on the album, ‘Morning Dove’, manages to invoke the spirit of  The Band as Phillips reminisces about his first experiences of Tennessee “One day I’m gonna lay my head/In the long cool shadow of the dogwood. Lay back and let the cotton clouds go by.” One of the standout tracks on the album is ‘Gather Up’ which is a country blues with heavy gospel overtones. Phillips has said the inspiration for the song came from “When I was kid, I was forever being dragged off with my grandparents to some little country church. The folks were always friendly as the long cars pulled up into the gravel driveway. Everyone in their Sunday best – my grandpa in a suit, grandma in a flowered dress. Once in the pews, the mood would sometimes darken with the threat of some cataclysm. There was also music. A guttural kind of music that comes out of the mouth of an old man and an overdriven amplifier. Those things stuck with me.” Phillips looks back at his small-town 19-year-old self in ‘Straight To The Ground’.

‘Lightning Show Us Your Stuff’ is an excellent album with everything coming together to give an old style classic album experience. If you are a fan of Grant Lee Phillips you won’t need any encouragement to listen to this, if you don’t know his music then this is an excellent place to start. The quality of the songwriting, vocals and instrumental performances are all first class. Definitely a contender for inclusion in the best of 2020 lists at the end of the year.