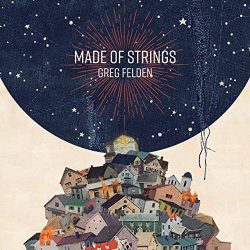 Already an established musician in America, where he is based in Los Angeles, this is Greg Felden’s full length debut album. His choice of producer here is significant – Al Sgro who began his professional career working with Gary Jules, touring the world on the success of ‘Mad World’. His experience shines through here, through Felden’s singing and songwriting and the support of known and respected LA musicians.

‘Every Time’ is an up-tempo, perfect start, appealing through its couplets: “I know I’m gonna make some mistakes”/(But) I’m proving that I’ve got what it takes.” Such a feeling epitomises the philosophy of the record, and its basic advice: never mind how bad things appear, come back again and learn a thing or two. It’s there already, up to the first bridge: “I will do all I can, every time/ Every time.”

In the central, title, track, with its, discordant start, ‘Made Of Strings,’ we are reminded of a 19th Century hymn, with reference to the Promised Land. The beating heart of this album of high stories captures the listener who can appreciate that there is something else going on here. Through “strings” there is an implied message that understanding life, its ups and particularly its downs, convey an attempted appreciation of life itself, its strings and its gravity. String Theory is hard to understand, at times, but easy, perhaps to get involved with. Seldom is it that an apparently straightforward album can convey such deeper thinking and understanding. A pointer to the importance of Felden’s work here. He deserves attention.

In fact, every track here deserves attention, as does Greg’s work. Space here only allows analysis of one more track. ‘Ghosts,’ the longest and last track, is an extraordinary and moving piece of storytelling. “There’s a box up on the top shelf.” Who can resist such a start? Greg’s soft, confiding, almost ghost-like voice commands attention straight away. So, a theme develops, and the first bridge with simple flute like organ and simple guitar background provides the perfect setting. How affected we are by significant moments of our past, missing close people we have loved. What draws the listener in still closer is the simple detail: “There’s some ruins in the back yard.” This is outstanding and unforgettable song writing, coupled with sit up straight and listen lines: “Then I’m gone. Then I’m dead.” And the memorable characters: the “stranger,” “a screaming politician,” and “my lover in the kitchen.” Take note of the startling ending to a remarkable song and a remarkable album.