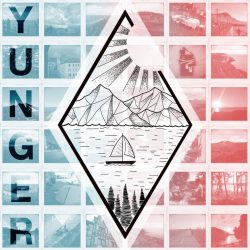 Summer is coming and, if you’re looking for a soundtrack to accompany you on your travels through those hazy, sunny days, then you may well have found it in the dreamy indie-pop folk of Yunger’s first solo album. Yunger is the solo folk project of Felix Junger, a multi-instrumentalist who performs in a variety of genres. Here, he displays mastery of various instruments, including acoustic and electric guitar, mandolin, banjo and accordion, all of which he played and recorded himself.
All these instruments are drawn together through Yunger’s consistently solid song-writing skills and the album’s thematic and musical coherence. The end product is absorbing and energising.

The opening track, ‘Run Away with Me’, begins with an immediate rhythmic strum. The song sets out the album’s strongly expressed themes of searching for something new, escaping the confines of life to begin again. Listeners can relate to the explicit desire to be free: “The unknown is calling again…Let’s call the horizon home…I want to believe that I’m going to be free.” There’s a sense of restless urgency, musically and lyrically. It’s a strong start. This is followed by another song explicitly about travel and moving on to new places, ‘Bus Ride’. One of the album’s singles, ‘Bus Ride’ is an uplifting slice of poppy folk, given depth through beautifully layered vocals and accordion accompaniment. ‘Last Summer’ is the first of three songs on which Count Minus features, playing the gorgeously evocative flugelhorn, transporting the listener into the narrative and arousing memories of summers past. There’s an open honesty to the wistful lyrics: “And then I think of the summer and the life that I had planned.”

On an album full of engaging tracks, another highlight is ‘Pocket Poetry’, a beautiful duet with Stella Loca. Her voice complements Junger’s well and a gentle electric guitar solo rises from the vocal melody effectively. ‘Chocolate, Beer & Roses’ is also particularly successful; there are quiet moments that build with layers of banjo and mandolin. An idealistic message: “It’s all about leaving, just a map in my hand/I don’t care about arriving, I found my wonderland.” The album is punctuated at the halfway point with a driving instrumental track, ‘On the Run’, which manages to create a genuine feeling of yearning and freedom.

There are times when the jaunty, summery sound is hiding a darker message, such as: “…you have to believe that every little step…is worth the grief,” on the pacey, rhythmic ‘Every Step’ and, “…drinking in the exact same bar I wanted to escape…put a dagger through my heart to kill the agony inside/To carry me away,” on the resigned ‘Farewell’.

‘Of Journeys and Other Longings’ is a consistent debut with a strong sense of identity and a clear theme, reinforced and repeated throughout the album. There is a thirst for travel and a longing to seek and discover something more, summed up in the line: “I don’t care if I’m gonna die alone/As long as I can say I fucking tried it all.” A range of instruments are used to good effect, particularly the haunting flugelhorn. Ultimately, it’s an uplifting album that is easy to relate to and bears repeated listening. Perfect for summer journeys.

Indie-folk songs of summer and journeys of discovery