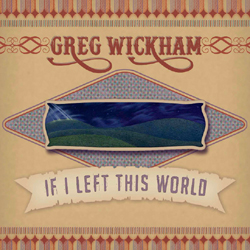 Greg Wickham was a member of Hadacol, a rootsy “alt country” band who released two albums at the turn of the century and If I left This World is his first release in 15 years. Reuniting with band members Richard Burgess and his brother, Fred, Wickham was lured back into a studio as he felt the need to leave a musical message for his kids, something they could listen to when he was no longer around. Although he appears to be in fine health, the album is peppered with allusions to mortality and colleagues who have shuffled on, most notably the late Lou Whitney (who produced Hadacol) while there’s a sound clip of his own father singing a snippet of Big Iron.

While several of the songs have the loose limbed country rock feel of the Hadacol releases (Wake Me Up, Me Oh My, Ain’t No Way To You and How Much I’ve Hurt in particular) Wickham has recruited a slew of Kansas musicians to swell out the sound including a horn section and occasional strings. The result is a varied album that for the most part hits the spot. The Celtic tinged Angel Of Mercy (Song For Sophie), the melancholic piano ballad Small Roles and the closing country waltz, Elsie’s Lullaby all  deserve attention but a couple of the songs raise the bar. Waterfall is a rambunctious approximation of The Band’s joyful country soul while the title song is a delightful country duet (with Kasey Rausch) in the best George and Tammy tradition and I Will Comfort You is fiddle and banjo led country rock at its best.

A nineties “alt country” rocker returns to the fray, older and wiser