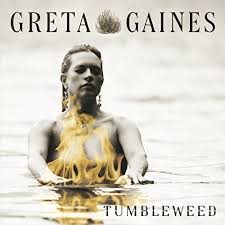 Don’t Bogart That Joint will probably be one of her favourite tunes when Greta Gaines is asked to appear on Desert Island Discs; and a vaporiser most likely her luxury object. A lifetime campaigner for the legalisation of marijuana and former advocate for the National Organisation For The Reform of Marijuana Laws (NORML), all profits from her anthemic, proselytising and very moreish track Light It Up featured on her new seven-song EP Tumbleweed will be donated to NORML, Patients Out of Time and Tennesseans United; charities dedicated towards the legalisation of medical marijuana and treating people suffering with chronic health complaints.
Nashville resident Gaines was originally in the headlines back in 1992 when she won the first Women’s Extreme Snowboarding Championship. Balancing a career in Extreme Sports, music and working as a TV presenter for ESPN and Oxygen, it’s been four years since her last release Lighthouse and the Impossible Love.

Taking time out of the studio while she brought up her two sons, it was the recent Presidential race that prompted Gaines to get writing after she had a spiritual experience while walking her dog in the woods near her Nashville home. “I kind of heard angelic voices saying ‘Begin Again’. That was the inspiration I needed to let the flood gates open, to sit down and write all day and night until the muses stopped speaking to me.”

The seven tracks she’s laid down on Tumbleweed are like those Kit-Kat’s and the packet of chocolate digestives you buy at the all-night garage when you’ve got the munchies. You only intend to eat a few, but before you realise it, you’ve devoured them all and you are putting your coat on to go back down the road because you forgot to get the Rizla and now you fancy a Twirl.

If like me, you are a fan of Aimee Mann’s work, you are going to love this EP. Begin Again has some delicious backing vocals that contrast with Greta’s beautiful voice and bring to mind the b.v’s on Led Zeppelin’s Stairway to Heaven, angelic voices indeed, that resonate with William Blake’s angels that serenade him into perpetuity around his grave in Bunhill Gardens.

Produced by Eric Fritsch, Greta’s musical buddy who has stood by her through thick blunts and thin one-skinners, Fritsch, who has previously worked with Porter Wagoner, Kathy Mattea and Sam Lewis, has sculpted a warm, oh-so-endearing soundscape that makes you want to get down to the nittus-grittus and idle away the hours while you bathe in its chakra-harmonising sound waves.

Greta, like any spiritually minded person knows that when you meet ‘the one’, it is the time when your chakra’s, in particular, your crown, throat, heart and sacral chakra have become synchronised and aligned with each other’s. Greta knows this, her track Heal was carefully sound-designed by her and Eric so its skillfully chosen reverberations will do just that. They produce a healing energy, in part similar to the vibrations produced by practising The Metta Bhavana – a heart meditation that opens the heart to the wonders and beauty of the universe simply by repeating the mantra May I be well, May I be happy, May I be free from suffering and then visualising that vibration beaming out towards the entire universe.  You try that at home while listening to Heal and you will understand precisely what I mean.

As David Crosby used to say, “Sometimes I feel like letting my freak flag fly…” Well, Greta’s freak flag is flying high and proud on Light it Up. In the United States, citizens in seven states from Alaska to Washington have voted for marijuana to be available for medical use and also a small amount for personal use for the general public. Will the United Kingdom follow their lead? After all there is evidence from medical trials that marijuana is efficacious for Multiple Sclerosis symptoms such as spasticity and is also excellent for improving appetite for cancer sufferers and as a palliative medicine for those suffering with terminal illness, as well as many other ailments.

‘There’s a trail in the foothills/ that leads to a green gold mine/That shit is sweet as cherry wine/There’s a grandma in the basement/Learning how to grow hydroponically/She says “it’s like growing a weed’.

Sweet September, wide-eyed at the splendour/These green leaves help me remember what it means to be free/

Let it grow, earth and sky/roll it up let’s get so high/strike a match, raise your cup/just don’t tell us we can’t light it up/we came to light it up/

Light it up, now/light it up!’

There is nothing Greta enjoys more than smoking a wee spliff, climbing into her hip-high rubber boots and then sliding into murky waters to have a fiddle with someone’s flies. No, I’m not being salacious. It’s the truth, Ruth. Greta is a renowned fly-fisherwoman who has taken part in many competitions and has presented numerous fishing programmes, but she has said she would definitely “give up her TV career for a three pound Bass.”

Let’s hope she doesn’t give up on her music. On the evidence of Tumbleweed, Gaines could be using her time more productively, and should get her act and her band together and get out on the road. Maybe skip the one immediately after breakfast, eh Greta?