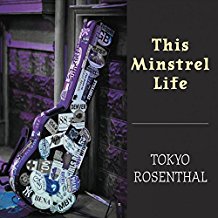 How do baseball players stay in touch? They touch base every once in a while! I have to admit I know absolutely diddly about this fabled sport. But I know a man who does. Tokyo Rosenthal, or Toke, as he is known to his friends and fans, is da man. Musician, sports fan, former boxing promoter and poet: as well as releasing many albums – This Minstrel Life – is his seventh CD; this Renaissance man is also the author of two books. A massive New York Yankees fan, A Fauxtographer’s Yankee Stadium Memoir is an account of his time as a photographer at the original Yankee Stadium, when he managed to blag a photo-pass in the late seventies and went to watch the sacred game free each week for five seasons.
Toke’s memories are captured in the book with over 100 of his photos of baseball legends such as Mickey Mantle, Catfish Hunter and Goose Gossage to name but a few. As well as the new record, he’s just published the first volume of an autobiography that follows his childhood years called Our Last Seder. I wonder if Toke is related to the late, great, Jack Rosenthal, another big sports fan, who wrote the script for the brilliant Ptang, Yang Kipperbang?

Like many a sports fixture, Toke’s new album is a game of two halves. One side features brand new studio cuts, the other live recordings from a diverse selection of gigs with very special guests. When the needle dropped on the record I felt a twinge of excitement that took me back to the first time I heard Dylan’s Desire and that sweet fiddle played by Scarlet Rivera. On Hundred Mile Man (which pitcher is Toke referring to  – could it be Yankee Mariano Rivera or Pittsburgh Pirate Bob Veale?), Toke is joined by the nimble-fingered John Teer from Chatham Country Line who instantly gets Toke’s party started and then some. Who is your favourite pitcher, dear reader? We would love to know over here at AUK.

A delightful dobro from Allyn Love is featured on the title track. His pleasing riffs, teasingly caress the notes from So You Want to be a Rock’n’Roll Star? providing a sub-text to Rosenthal’s autobiographical song that reveals that Tokesees a correlation between the old time minstrels and today’s musicians. He reckons that “I see myself and my colleagues, mirroring the way things were in the 1800’s. In other words, we go from gig to gig, often getting room and board, selling our wares, and of course performing our original tunes.” The main difference being, that nowadays “We travel by car, back then by horse.” And they also have the delights of the internet as a marketplace for musician’s songs and also excellent music blogs (ahem). Nothing pony (express) about that!

Toke gets political on the excellent Now I Believe there’s a Devil. Blonde hair, orange tan, climate change denier?  Who could he be singing about? Whomever, it’s a gorgeous track augmented by some marvellous Tex-Mex style accordion from the awesome David DiGiuseppe from Craicdown and the dobro is played brilliantly by Dan Mahoney on this track.

The live side features accompaniment from the Sap Boilers, Manguss, Charlie Chamberlain and Kieran O’Malley recorded respectively at gigs in Pittsboro, Knoxville, Austin, and dear old Keighley. The live side captures the excitement and enjoyment of a good Toke, alongside his musical buds, as well as showcasing Rosenthal’s between-songs-banter and humour.

With This Minstrel Life you get a great insight into the complete world of the Toke-ster doing his oh-so-funky thang at home in the studio in Chapel Hill, North Carolina and out there on the long and winding road. But let’s not forget his books and boundless love of all things baseball.  Now, Toke, can you tell me who’s on first, again?

Treat yourself to a Toke. Tokyo Rosenthal scores a home run with his brilliant new album!