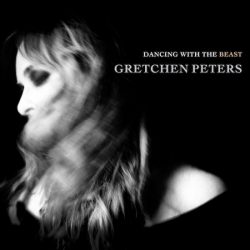 A new album from Gretchen Peters is always cause for celebration. She has consistently been one of the finest songwriters in the Americana genre and just seems to go from strength to strength – it is quite amazing that someone can continuously turn out songs of this quality. This new album, ‘Dancing With The Beast’, is her first recording of all new material since 2016’s ‘Blackbirds’, which won her an Americana Music Association UK award for International Album of the Year as well as International Song of the Year for the title track. This new album is every bit as good.

Peters’ great strength as a songwriter is that she’s not afraid to take on the difficult subjects and not above shining a little light into those darker recesses of the soul. While others might write happy songs about new love or bittersweet reflections on past affairs this artist will readily take on old age, prostitution, child abuse – let’s not forget she first came to prominence as the writer of Martina McBride’s controversial single ‘Independence Day’, celebrating an abused wife fighting back; a song that went on to win Song of the Year at the Country Music Association’s awards in 1995 and earned Gretchen Peters a Grammy nomination. This new recording once again deals with the difficult subjects; these are adult content songs written for a thinking audience by an intelligent artist. The fact that they are also beautifully played, sung and produced is the icing on a particularly enjoyable cake.

The album kicks off with “Arguing With Ghosts”, a gentle, almost whimsical reflection on growing old but there’s a bite in the lyrics that is typical of Peters’ songs – even at their most gentle you’re always waiting for a possible sting in the tail. “I get lost in my hometown, since they tore the Drive-In down. I find myself all turned around. I get lost in my hometown”. Is this just growing old or, maybe, something a little more sinister? Later in the song she notes that “There’s a picture on the wall. We got married in the fall. I don’t know those kids at all” – do memories just fade or do they start to die away.

There’s little time for reflecting on the deeper meanings of the opening track because next up is ‘Wichita’ and we’re in classic Gretchen Peters territory, with little doubt as to what the song is about – “I would’ve called the cops and told them what you did, but whose gonna listen to a story from a little kid?!” It’s dark and brimming with menace, well driven along by some excellent dobro guitar (from Jerry Douglas, no less!). This artist has always been an outstanding writer but this album also helps to demonstrate how much she’s grown as a performer in recent years. Her voice has real strength and great tonal quality that lets her bring a strong storytelling narrative to these songs.

Elsewhere we have songs about a summer romance and broken friendship (‘The Boy From Rye’), loneliness and isolation (‘Life is a Disappearing Act’), prostitution and personal respect (‘Truckstop Angel’) and, in the title track, ‘Dancing With the Beast’, the very real problems of battling with depression. It’s not all doom and gloom and there are some nice moments of levity and light in the darkness. On ‘Lay Low’ she reflects on life on the road and the need to take a little time out – “Think I need to lay low for a while; stare at the Gulf of Mexico for a while. Tell them all where they can go for a while. Think I need to lay low”. And on the beautiful ‘Say Grace’ she gives us all permission to lighten up on ourselves – “Say Grace. Forgive yourself for all of your mistakes. You are not a loser, you are not a hopeless case. Come inside and set yourself a place. Say Grace”.

These are all songs about the human condition – what it means to love, to live, to grow up, to grow old. Gretchen Peters has to be one of the very best at writing, and delivering, songs of this nature. They’re not going to get you bouncing out of your seat or raucously singing along as you drive down the motorway but they will make you think and reflect and, maybe, ask yourself a few questions; and that’s surely no bad thing.

A mention has to go to the great production job on this album. Working again with Doug Lancio and Barry Walsh, Gretchen Peters has co-produced the album and it really is an outstanding job. There’s a wonderful clarity and balance to the tracks and the musicians have all turned in flawless performances.

This is exactly the sort of album we’ve come to expect from Gretchen Peters – well written, well performed, pretty much perfect. It ought to be a ten review but you know there’s a good chance the next album will be even better! The artist deserves to have the last word. On the track ‘Lowlands’ she sings “We get a lot of clouds here in the Lowlands. Now and then a little light gets through”. Here’s hoping that Gretchen Peters continues to let a little light through for a long time to come.

Singer/songwriter at the top of her game raises the bar yet again!

0 thoughts on “Gretchen Peters “Dancing With The Beast” (Proper Records, 2018)”