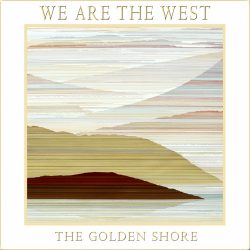 For the last 6 years, on the Saturday before each full moon, We Are The West transform an everyday Los Angeles underground car park into a performance space where their concerts are supported by, and collaborations made with, a rotation of any and all soundscapes from the LA scene. As their musical story began in a shipping container on a sheep farm in Holland, via an abandoned convent in Brooklyn, it is perhaps not surprising that this doesn’t present as your regular album.

Nominally an acoustic/upright bass duo, their debut album comes after a series of EPs, and features contributions from a raft of their musical friends, brass, accordion, woodwind all drifting in and out of tracks. Their label describe them as ‘experimental folk’, but with no one dominating style, that really doesn’t do justice to the bucolic arcadia tracks such as ‘Crops’ and ‘To The Bower’ present. But it is to the sea that We Are The West mainly look, gently opening the album with synthesised seagulls and breakers in ‘Sirens’. At times this is an album to luxuriate in, to lay back eyes closed and find yourself transported to that SoCal Golden Shore. Spacious, empty elements recall Talk Talk’s –‘Spirit Of Eden’, then alternate with early 1970’s feel songs where Gordon Lightfoot would be a fit. The multi-instrumental approach can tip into Arcade Fire like indulgence, but is saved by gems such as the dreamy beauty of ‘Any Day Of The Week’. Closer ‘Tonight’s Tonight’ starts so much like ‘Naked As We Came’, that when different lyrics start, it’s a surprise to find it isn’t a cover, though as it features Sam Beam’s drummer then this may or may not be a coincidence.

A unique band, where the acoustics of nature produce a fever dream where the breeze from the Pacific balances the summer heat to leave the listener mellow and conveyed.

It’s more than a year since Chloe Foy graced the Paper Dress Vintage stage as part of AmericanaFest 2020, with promises of gigs to come and an exciting year planned.  Well, it was an exciting […]