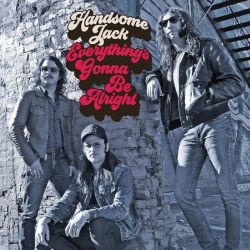 There are those for whom the late Sixties and early Seventies represent the apogee of popular music. There are those for whom the power trio is the finest possible format for a band. Where those groups intersect is the place where New York outfit Handsome Jack reside. The raw power of Cream, the Stones at their most soulful, the driving rhythms of Creedence, all this and more is present and correct. The riffs are heavy and the vocals raw and impassioned. If these guys have the blues then they’re having a damn good time singing about it. ‘Baby Be Cool’ sounds exactly like its title and it’s a song and performance that the Glimmer Twins would be proud of while ‘Why Do I Love You The Way I Do’ just oozes soul and ‘Got It Bad’, well, let’s just say that if John Fogerty and the late Jim Ford had ever recorded this is what it would sound like.

Yes it’s all seriously retro, unashamedly so, and if that’s anathema to you then you need to move on. But it sounds great and pulses with energy and fire. Not only is it a great call back to those who were there the first time around or who carry the fire even if they weren’t but it’s also a proper rock’n’roll record that blows most of the competition out of the water. Everything’s gonna be alright.