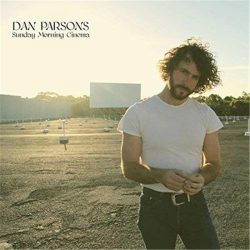 Where is the next great Americana album going to come from? How about out of Queensland, Australia? That isn’t exactly true; Dan Parsons’ fourth album ‘Sunday Morning Cinema’ was recorded in Melbourne. But Parsons himself grew up in rural Queensland; an only child with a reel to reel 4-track and a developing talent for playing drums, pedal steel, guitar and keys. He learnt his craft well and make no mistake, this is a fine record; nine tracks and 35 minutes fully deserving of your appreciation.

The album opens with the title track, a song as comfortable as favourite slippers, dripping with shimmering pedal steel and the kind of chorus that winkles out the harmonising ambitions of any listener. Go on, try it – by the third listen resisting a backing-singer persona becomes very hard. But then again, why would you? This is music to revel in. ‘Here Goes Nuthin’ seamlessly shifts gear into laidback country rock that bounces along with another incredibly infectious chorus. ‘Dream Lover’ is notable for the more atmospheric pedal steel before the chorus delivers some memorable folk rock. The songwriting is very clever; ‘Whole Lot of Courage’ with its gentle propulsion and accelerations coaxes thoughts of a car ride where the pleasure is in the journey and not the arrival. Imagine slouching on the leatherette seats just enjoying the feeling of motion, maybe a breeze from the half-opens window and, of course, Parsons on the stereo. Then comes the line “Sleeping with one eye open and my hand on the wheel” – how did he know? Or maybe Parsons has intuitively grasped how his songwriting shapes and works sub-conscious imagery, and he uses it brilliantly.

‘Codeine’ changes tack again, its loopy, giddy guitar evocative of a woozy opiate-filtered appreciation of reality. And that is just the first five songs; all within the same genre-defining strictures and yet all very individual. Each song is so beautifully crafted and produced; every instrument has its place and each one can be heard clearly emphasising the tight song structures. All the more remarkable then that the record was recorded live over three days. This is the aural equivalent of an Anne Tyler novel; there are no gimmicks here and a note is never wasted – just brilliant storytelling: tight, bright and polished and utterly captivating. It may be unfair even to suggest there is a standout track, because this is all just plain beautiful, gorgeously laid back with an immense understated power.

There is no real need to mention that Parsons’ voice is often reminiscent of James Taylor other than to entice anyone as yet unsure just how good this record is. An album that will stand up against anything released this year and one which makes a very strong case for turntable occupancy.