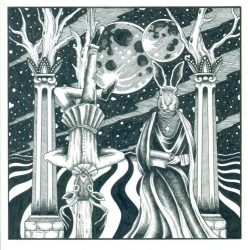 For their second record together, Sanders and Savage continue to mix ethereal traditional folk with dabs of colour from across the musical spectrum. The mix of six originals and five covers offer no easy distinction between the two pools; they all feature the spring water fresh vocals of Sanders or the gruffer tones of Savage against a backdrop of instruments that capture each note as though it is worthy of preservation and curation. The attention paid to the detail pays off, each track contains painterly touches such as the pedal steel that wraps itself around ‘I Met a Man.’

‘7,’ with its incorporation of the old Magpie rhyme (One for sorrow etc.) illustrates how they meld the traditional with other elements; each bass note can be felt and the pedal steel and guitars move with the grace of an unwatched deer. The title track with Savage on lead vocals opens up when he is joined by a trio of female voices that take the song onto a higher plane; again in a simple clear way. The closer ‘Reaching’ again shows the understated power of the duo; it starts with Sanders accompanied with tendrils of guitar; as the song progresses it opens out with long resonant bass notes in counterpoint to the beautiful vocals, and then the shock of a drumbeat as the song pulses to its conclusion. Sanders and Savage have produced a beautiful sounding record that manages to have resonance for traditionalists and has something that should appeal to those who like something more of the 21st century in their music.

Like a sympathetically remodelled Victorian terrace, it matches the best of the past with some needed modern touches