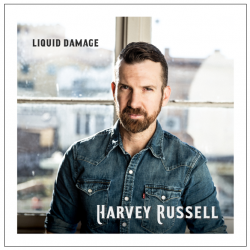 If you listen to Harvey Russell’s new album ‘Liquid Damage’ on SoundCloud, then there are three hashtags: #Americana (we’ll come back to that), #honkytonk (lots of that on the album) and #alt-country. Well this album shouldn’t really be filed under that as the nine songs on the album are pure, traditional country – in fact it could be #country&western!

The album opens with the new single ‘Please Don’t Pretend’ which features some twangy electric guitar as well as superb pedal steel and some honky-tonk piano and gets the album off to a rollicking start. There then follows ‘Am I Good Enough For You’ which adds fiddle and harmonies to the basic band line-up giving a slightly old-fashioned, country-rock flavour. Of the other seven tracks, ‘Rollin’ Into Town’ has a flavour of early Eagles to it, ‘Walkin’ Downtown (Again)‘ has old country writ large all over it and ‘Few And Far Between’ has the feel of Dylan’s ‘You Ain’t Going Nowhere’ in the intro.

One of the stand-out tracks is ‘Jezebel’ with its waltz-time tempo, pedal steel, fiddle and twangy and Duane Eddy like guitar which features Russell’s plaintive voice at its best. The other stand-out is the melancholy ballad ‘Liquid Damage’ which features the line “Holding on for dear life” which if it refers to the “liquid damage” of the title, echoes “At the bar drinking whisky” a line from ‘Gave You Flowers’. In fact, there is a feeling that seeps deep into the album of addiction and as Russell himself says “As a theme, drinking and the ‘damage’ or trouble it can create, is a well-trodden ground for country music”. This is ironic as Russell and his band play the kind of music best heard in a bar.

So, if this sounds like an archetypal Americana album, it is, but file under a sub-section (if there is such a thing) as Australiana as Russell is from Sydney and the album was recorded in the city’s Love Hz Studios not somewhere in Texas or Tennessee.

Although billed as a solo album, Russell does have a band, The Widowmakers who appear on the album. They are Aaron Langman on pedal steel and electric guitars, Jonathan Kelly on bass and Rich Burrows on drums. They’re augmented by producer Michael Carpenter on keyboards, Luke Moller on fiddle, Peta Caswell on backing vocals and Jadey O’Regan on piano.

There’s a tradition of country music in the Antipodes and Russell has made a fine #Australiana album following in the footsteps of his compatriots such as Keith Urban, Casey Musgraves and Jimmy Little amongst others and it’s well worth a listen.

An excellent album from one of Australia's finest country singers