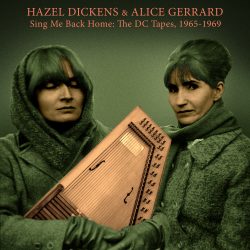 Hazel Dickens and Alice Gerrard are seen as the pioneering women of bluegrass music.  ‘Sing Me Back: The DC Tapes, 1965-1969’ is a raw, unproduced album that highlights the duo’s quality, recorded in Gerrard’s kitchen on a reel-to-reel recorder – their authentic talent does shine through. Some of the songs will be familiar when listening to the unearthed album, like the Everly Brothers’ ‘Bye Bye Love,’ The Carter Family’s ‘Cannonball Blues,’ and Dolly Parton’s ‘In the Good Old Days (When Times Were Bad).’

The album only has one song that was ever released commercially by the duo, so having eighteen never heard before tracks from one of the biggest Americana and bluegrass pioneers is an amazing find. For fans of the Hazel Dickens and Alice Gerrard duo, and aficionados of original bluegrass and Americana music, this album is priceless. Even from an academic and historical perspective, the album has significant value, not only in the quantity but also the high quality of the songs, especially when you consider the fact that the recording is fifty years old.

Having an album comprising just two voices with instruments that were to hand in their home makes the music sound incredibly authentic. Their friendship shines through in their singing, all of which makes this feel like a personal discovery – as if you were sitting alongside them while they were recording it. All in all, it’s a great find and fans of the genre should listen to appreciate the history behind modern interpretations of Americana.