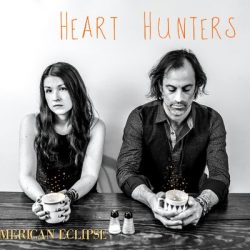 Husband and wife duo Heart Hunters (Drew de Man / Brianna Blackbird) write and sing songs with an environmental and social conscience and, with ‘American Eclipse,’ they dive head first into the murky pond of 21st century American life. In de Man’s own words: “we can’t just indulge in driving around playing music – we have to recognise our platform to spread ideas and use our music to aid social movements.”

When any artist, armed only with a moral compass, addresses political or social issues they face a battle to balance the sometimes heavy and political message of the songs with the need to make their music attractive to the ear. Sharing the vocals throughout, de Man and Blackbird have complied an album that achieves that aim pretty well. Ranging from the up-tempo country twang that runs through opening track ‘Normal America’ to The Beatles circa ‘I Am The Walrus / Within You Without You’ feel of ‘The Good Fight,’the album contains enough hook laden melodicism to be able to sound good regardless.

‘Sparrow To The Moon’ has a great groove – drums and organ providing the backdrop to an upbeat, radio friendly song that sits nicely as a musical companion to ‘A Thousand Lifetimes’. While these are two of the more commercial sounding songs on the album there is a significant difference between de Man’s vocals on ‘Sparrow’ and those of Blackbird on the latter, a difference that is reflected throughout the album and one of the reasons why there is no one, overriding sound on display here.

Whilst the duo often share the vocals there are times when Blackbird’s high-pitched tones gives the songs on which she leads a more folky, less overtly commercial feel. This is not to disparage Blackbird’s vocals, simply to say that there is a different feel and sound to those songs.

Whatever the style or pace of song, it is clearly the message that is important to Heart Hunters. This is a duo who have played in homeless shelters, youth detention centres, prisons and rehab facilities. Their songs cover racism, mass incarceration, homelessness, the treatment of native Americans and the dream of reclaiming redundant dilapidated strip malls and parking lots for local communities. The likes of Mitchell and Baez proved long ago that songs with a social and environmental conscience can also be incorporated into great sounding popular music. ‘American Eclipse’ isn’t a great album but it makes a pretty good fist of achieving that balance of message and music.