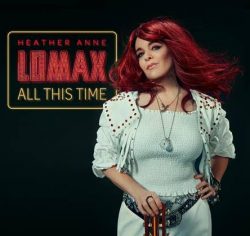 Los Angeles based Heather Anne Lomax has released ‘All This Time’, an album inspired by Elvis Presley’s ‘The Sun Sessions’, songs recorded in 1954 and 1955 at Sun Studios, but not actually released as a compilation until 1976. These were songs recognised as having some significance in the development of popular music and the album has been regularly cited in the upper echelons of Top/Best Albums lists ever since. Lomax’s album certainly captures the feel of Presley’s collection – there are references to the album being mixed with ‘sonics’ of the original in mind – if not perhaps the quality of songs and influence.

Featuring a mix of rockabilly, country and plain old rock n’ roll styling in the main, the album contains excellent musicianship, including fine guitar work throughout, along with healthy smatterings of fiddle, organ and accordion. Lomax’s voice seems to strain at times, but in the way that Johnny Cash’s voice would; there is even a track called ‘Prison Cell’, perhaps to underline this influence. There is enough reverb in the mix to satisfy everyone, and plenty of vibrato guitar to keep it company.

Some themes are simple, almost naïve….title track ‘All This Time’ focuses on resurrection so there needs to be mention of phoenix rising from the fires (not for the first time); ‘Mr Popular’ features a narcissist who disguises his persona from the wider public (nothing new there); ‘6 Feet Under’ has more narcissists who manipulate truths (but of course), and ‘My Dog’ compares the faithfulness and love of man’s best friend with someone who only likes to think of themselves. Not exactly infused with sophistication then. However, other tracks have more depth and sensitivity….‘Comfort Me’ is about how Lomax lost both her adopted and birth mothers (the latter sadly at just 27), and the song itself builds wonderfully through a fine guitar lead; ‘Crumbs’ is another atmospheric number about those prepared to sacrifice their own needs and wants for others (and recalls Chris Isaak’s ‘Wicked Game’ into the bargain); and final track ‘Just Like Yours’ laments on when soulmates finally show up in life, you can’t always be with them.

There is an inconsistency in some of the quality of the songs, both lyrically – “Don’t you think it’s funny/Your mood is rather sunny” is one example – and predictability of some melodies (‘The Heart Don’t Lie’ highlights this) which take the sheen off the album. The sonics are most definitely there, there is a high standard of musicianship throughout… it just doesn’t hold up all the way through.

Elvis’ inspiration not quite enough