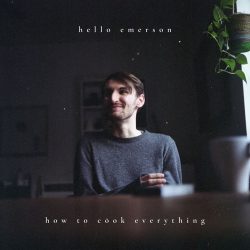 Hello Emerson, of Columbus, Ohio and led by English Lit grad Sam Bodary, release their second album intriguingly titled ‘How to Cook Everything’ for us to contemplate, cogitate and digest. And sure, dip into it and you will find ten narratives about buildings (actually not many) and food (a scattering) and a few that generally explore coping with the slings and arrows of life’s outrageous fortunes. There are, I would wager, not too many songs in anyone’s record collection in which the story revolves around a book which, having given as a present, falls apart in the reader’s hands (‘Kyle Kerley’). Therein lies a taster for what this album offers.  The entrée ‘ The Last Dinner’ sets the mood, dressing up for a restaurant that is beyond the singer’s means forefronts the purpose of the farewell meal. Musically it sets the tone too, this is song-writing as story-telling set to a score that builds from a single acoustic guitar to a rich peak with pedal steel, brass, piano and strings.

In each of the songs on this left-field leaning record the instrumentation is a canvas on which the lyrics take us places songs rarely go “Kathy Davids needs a new printer, a colour inkjet” (‘Dancing in the kitchen’). If that seems like it might be a struggle to find a rhyme, it is, but that is not something that unduly worries Hello Emerson, and, once you get used to the sometimes seemingly stream of consciousness, neither should it worry the listener.

The album’s recording feat of getting 50 musicians (including a 30 part choir) together over just three days, already and impressive piece of logistics, now seems extraordinary, how did they do that and keep two metres apart?  But in those halcyon, socialising days, Hello Emerson stirred the pot to cook up a collection of quirky tunes. Some succeed better than others ‘We Lost’ where the singer is ‘”a goalie in an indoor soccer team’ and “We lost and we lost and we lost and we lost” tries a little too hard,  whereas ‘Am I the Midwest’ is a triumph, an exploration of what it means to be where you are from and present that in all its glory, faults and contradictions “Am I the Midwest?/the one we read about/ the one they send out reporters across the state borders just to figure the people out?/ Am I the Midwest?/ the one the interview on the radio stations of European nations where Americana still feels new”.  Possibly the album’s strongest song (and it rhymes!) it is worth the price alone.

‘Am I the Midwest’ apart, there are many really rather interesting observations to explore on this release set to music that, contradictorily, seem very individual and also pleasingly familiar. “Kyle Kerley”, who gave the aforementioned disintegrating book, is a tale delivered laconically over what sounds like the distant Americana cousins of the Brighouse and Rastrick Brass band. Hello Emerson’s pottage, if we want to deconstruct the ingredients, are a bit of straight They Might Be Giants, a dash of earnest Barenaked Ladies and just a soupcon of the catchy delivery of Noah and the Whale, all with a menu written to music by Garrison Keillor.

This is an album that may need some time to mature on your turntable. It is quirky, and at first those meandering story set-ups can be a little irritating. After a while though it is less of a meal and more of a balm. When is all too much (and let’s be honest, the time is nigh), there might not be a better time to have a wallow.

The last song ‘Seat 16B’, about a middle-aged women leaving her state for the first time to rekindle a college romance with a beau who moved away fifteen years before, ends with the repeated refrain “There is a first time for everything” – how about saying hello to Emerson being your mission today.

Original and idiosyncratic, there is plenty here to keep you entertained