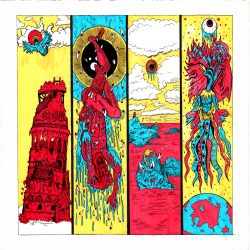 Icarus Phoenix is the latest vehicle for the music of Montana based artist Drew Danburry. The word ‘artist’ is chosen quite deliberately here because the debut release of Icarus Phoenix, as well as being a fine collection of songs, is something more than that. It is an exploration of personal well-being, self-worth, and rebirth. Danburry’s project utilises music to pose existential questions and to tackle sometimes uncomfortable themes. Whilst, like figures in a painting, each individual song stands up to scrutiny, it is only when the whole picture is revealed, that this collection can be most clearly be understood and appreciated. The relationship and interaction between the songs pull them together to create that bigger picture.

Drew Danburry has described Icarus Phoenix as “a life changing experience”. The album tracks his rebirth as an artist and as a being, through songs that he told AUK Editor Mark Whitfield in his fascinating recent interview, “are in chronological order. You can see or feel (or hear?) me crawling out of the depression so to speak”. You can read the full interview with Mark here. Clearly the album is a very personal one, but at the same time its expression of self-doubt flourishing into new hope and belief will engender wide recognition and empathy.

Danburry’s simple and often sparse but beautifully crafted arrangements create the perfect backdrop to songs borne out of anguish, but ultimately offering hope. The words are delivered clearly, with effective intonation that never crosses the line into affectation. The voice is clear, even strong, but paradoxically has an air of vulnerability expressed through the odd waiver or the occasional quiver. Danburry keeps your attention and focus on the words through his subtle changes of expression and emphasis. Listening you are taken on a rollercoaster ride of emotions, variously feeling sympathetic and sorry, shocked and saddened as well as relieved and gladdened.

An unusual aspect of the album is the decision by Danburry to make it a cassette only release. How many potential purchasers even own a cassette player nowadays? For an artist who has lamented (but accepted) his lack of commercial success, it might seem a rather contrary act. Danburry addresses this matter in his AUK interview, which is highly recommended reading. The interview also addresses the names incorporated into the song titles and some detailed discussion of individual songs, which make any brief analysis here rather superfluous to the review. I recommend that you get it straight from the artist himself.

Icarus Phoenix is a bold release on many different levels and very much worth seeking out. So, go up into the attic, go out to the garage, and locate that old Sony Walkman or radio cassette player that you or your parents stashed away with the familiar words  “it might come in useful one day” That day may just have arrived.

A beautiful journey through personal struggle and ultimate rejuvenation