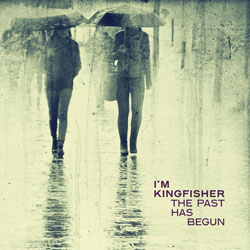 When Swedish indie-folk singer-songwriter Thomas Jonsson sat down to start work on ‘The Past Has Begun’, the third album under his I’m Kingfisher moniker, he came up against an old enemy – writer’s block. “I couldn’t really come up with anything new, and I didn’t know where I was going, or what to expect,” he says. “And then, it just happened, like it always does.”

One of the ways he overcame his lack of creativity was to listen to two albums in particular – ‘Honest Life’ by Courtney Marie Andrews and ‘Second Hand Heart’ by Dwight Yoakam. “They really hit a nerve, and I wanted to pursue that style for myself”, he explains – consequently, at times, ‘The Past Has Begun’ has slightly more of an Americana feel than some of his previous work, but, ultimately, the sparse and stripped-down arrangements still owe more to the folk tradition than country music.

The first song, the bruised but hopeful ‘Pocket Soul’ – “I got so much to live for. I’m back on my feet, but you should know, the wound didn’t heal” – is a great opener. In fact it’s the best thing on the album –a gorgeous, melancholy yet warm, ballad, in the vein of Ray LaMontagne, with acoustic guitar and violin. Another highlight is the autumnal and blues-tinged ‘Untimely Passion’ – Jonsson conjures up the ghost of ‘Pink Moon’-era Nick Drake, as he sings about a “black-eyed raven girl.” ‘Mess Minus Room’ is a pleasant country shuffle, the pastoral strummer ‘Dirty’ – “It was a dirty job, but no one had to do it” – has some folky flute on it, and the breezy ‘Is Nature Really That Cruel?’,  one of the few upbeat moments, edges towards indie-pop/rock, thanks to its choppy electric guitar.

Recorded with Jonsson’s long-time collaborator and producer, Carl Edlom, in his studio in Karlstad, Sweden, the album features guest vocals and harmonica from Amanda Werne of Slowgold on the rootsy ‘Children’s Atom Bomb.’ Swedish singer-songwriter Vilma Flood appears on two songs, adding haunting backing vocals to the brooding and twangy ‘Captain, I’m Going Blind’ and the atmospheric psych-folk of ‘The Plausible Impossible.’ Josh Gordon, who has worked with Damien Jurado, plays guitar, Mellotron and Minimoog synth – he contributed his parts remotely from the U.S.

This is often a lovely and alluring record, particularly the first half, but, over the course of its 13 tracks, it can also be wearisome and samey – sadly, some of the songs just don’t sink in, even after repeated listening. Talking about the album, Jonsson says: “You have to find the balance between wishing you’d done more and being happy with what you’ve achieved.”

There’s plenty to like on ‘The Past Has Begun’,  but you can’t help wishing he’d tried that little bit harder.

Melancholy Scandi indie-folk with Americana roots – diverting, but by no means essential