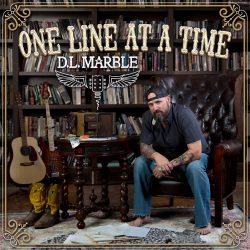 When D.L. Marble and producer Eric “Roscoe” Ambel, whose C.V. includes Steve Earle, Nils Lofgren and Joan Jett, were planning this album the conversation probably went something along the lines of, “keep it basic and simple, don’t tart it up”. ‘Ocean Beach’ kicks off as a straightforward country song, written from the point of view of a soldier on a tour of duty missing home. It is one of the more lyrically sophisticated songs. ‘Same Damn Thing’ “So good luck to the girls on the side of the stage. Boys at the bar makin’ minimum wage. Every lost soul out there on those interstates” and ‘One Line at a Time’ “I’ll write on this page to remind… I’m killing myself one line at a time” are more typical of the unvarnished style Marble seems to be aiming for.

The lyrics are the weak point of the album, and can sound a bit tongue in cheek at times, which they probably aren’t meant to be. Mostly they are made up for by the quality of the music, which while it is fairly basic is mostly good toe-tapping stuff. ‘Bombay’ with its simple C & D chord shuffle (the guitar chords are helpfully on the lyric sheet) is a pretty good rock and roll song. ‘Better Than Me’, a cracking slice of indie rock, that sounds very like Ambel’s previous charges The Bottle Rockets is worth playing loud on repeat. You can safely skip ‘California Memory’ though.

The closest musical comparison in places is The Travelling Wilburys. There is a Jeff Lynne feel to the drum sound, and the simple song structures and words give the album the laid back feel of the Wilburys’ records. You can hear closing song ‘Chasing You’ being sung by Petty and Dylan, which are also the best reference points for Marble’s voice.

D.L. Marble is very much on the country wing of Americana, but the Duane Eddy guitar tones, and Hammond organ fills keep it sounding interesting. Perhaps a lyric-writing partner might be a plan for the next album to avoid some of the cliché traps he falls into here. Overall however ‘One Line At A Time’ passes the time pleasantly enough, and given a few plays reveals some hidden charms.

Basic sound, and simple songs that grow on you with a few plays