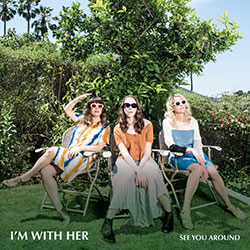 I’m With Her are a folk trio made up of Sarah Jarosz, Sara Watkins (Nickel Creek) and Aoife O’ Donovan (Crooked Still). Each artist has a fanbase following in their own right and can claim Grammy Awards, millions of Spotify listeners and a multitude of albums and musical projects between them.  Their musical heritage is apparent in the accomplished songwriting and arrangement throughout See You Around, their debut album. The album was co-produced by Ethan Johns (Ryan Adams, Laura Marling, Paul McCartney) and recorded at Peter Gabriel’s Real World Studios in Bath, England.

Throughout the album we are treated to breathtaking harmonies, intricate melodies and lyrics that draw you into the stories in the songs.  The instrumentation is also multi-layered: as well as each member playing guitar, songs are blended with fiddle and ukulele (Watkins), mandolin and banjo (Jarosz), piano and synth (O’Donovan). The result is an album firmly tethered to American folk music traditions.  The title track is a beautifully crafted tale of a break-up. There’s a bleakness here, not anger, just acceptance that this relationship has just come to an end and there’s nothing to be done: “These aren’t fighting words, just a declaration, I feel you, so I guess I’ll be going now”.

Ryland (Under the Apple Tree) brings to life a sleepy,hot summer spent drinking wine with a loved one in the shade of the tree. The story-telling is so effortless it feels almost voyeuristic to be listening in.  Many of the songs lay the vocals bare with minimal backing allowing the lyrics and harmonies to shine. Overland takes this approach when describing travelling the Union Pacific railroad from Chicago to San Francisco. The result is a song out of time: it could have been penned and sung in the 1800s when the American railways were first built.

See You Around ends with Hundred Miles, a previously unreleased Gillian Welch song. It’s a  relatively bleak narrative around a tough life and a long road travelled. Ultimately though, there’s love and hope in there and this is richly felt by the stunning combination of the voices in I’m with Her.