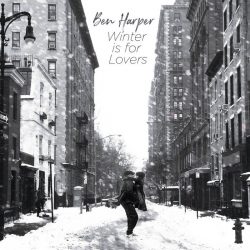 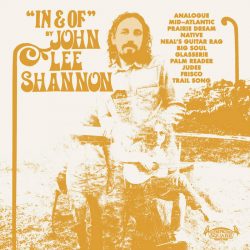 We don’t get instrumental albums to review in AUK land very often and lo and behold two pop up at once, the first being Ben Harper’s, ‘Winter is for Lovers’, the second ‘In and Of’, by John Lee Shannon. First off the blocks is Harper’s debut instrumental album.

Ben Harper “Winter is For Lovers” (Anti, 2020) Ben Harper is a celebrated performer and a man of many parts: award-winning singer-songwriter, producer, activist, collaborator, a prolific and much admired artist.  His songwriting and vocals on previous albums such as, ‘Diamonds on the Inside’ or, ‘Fight for Your Mind’, might be an acquired taste but, it has to be acknowledged, acquired by many. Harper is an established performer, however, this album appears to represent quite a departure.  Whilst there are examples of his highly regarded guitar playing on previous offerings, his new set features nothing but – no vocals at all – just Harper and his lap steel guitar.  It’s excellent.

Having been able to sit and listen in a dimmed room with the rain beating down on the Velux on a miserable day, these tunes were pretty much the perfect aural experience.  There are 15 tracks in all designed to recount memories of various global destinations, including Islip, which I have down as a small village in the Cotswolds. I’m glad Harper liked it, but not a destination comparable with tracks name-checking cities such as  Istanbul, Paris and Toronto.

The recent, ‘10 best’, feature on guitar players had as one of its touching points the school of ‘American Primitive’ playing as a genre and there are echoes in this collection of a number of players mentioned therein, for instance, John Fahey, Robbie Basho and Leo Kottke.  It is also to be noted that as with a number of those artists, Harper was initially self-taught, listening to records of the old blues masters.  He later came under the influence of Taj Mahal and toured with him.  He has also spoken of learning a great deal from Chris Darrow, once of Kaleidoscope and The Nitty Gritty Dirt Band.  Harper does not exhibit the eye and ear-catching dexterity and speed of the likes of Kottke (which apparently led to its own physical problems); the music here is very much about tone and mood – which he renders with great skill.

Harper explains the track, ‘Inland Empire’, with its feeling of longing for his birth-place,

‘It’s the section that feels most like me, so I named it after the place that I come from. It’s the accumulation of my having a relationship with the lap steel for as long as I have now’.

”London’, is inspired by some of the great English players.  You can hear Led Zeppelin in there, there’s a definite Jimmy Page, John Martyn, Richard Thompson element.  The track, ‘Paris,’ is really just a walk through a Paris park on a beautiful day. It’s what that experience sounds like to me‘.

Harper refers to this piece as his, ‘Lap steel Symphony‘, however, it clearly is not,

‘An elaborate musical composition for full orchestra, typically in four movements, at least one of which is traditionally in Sonata form’,

Nonetheless, in many ways, the simplicity is the fundamental charm and the music all the better for it.  Absolutely worth a listen.

John Lee Shannon “In and Of” (Tompkins Square, 2020) If Harper’s pieces are about mood, tone and feeling then Shannon’s are more about musicality and melody – or as has been usefully suggested elsewhere it is not so much Takoma, more Windham Hill. Shannon is a session musician and as he puts it, more involved with the music of others than with his own.  It was a meeting and instant connection with Neal Casal that in part inspired this debut album which has come together over a period three years.  Casal was a vital influence,

‘He hipped me to so many recordings that had somehow flown below my radar. In particular, he revered the British folk-guitar heroes of the late ’60s and early ’70s. People like Davy Graham, Bert Jansch, John Renbourn, etc. and turned me on to so much of their music. He also introduced me to a lot of obscure guitarists from the hippie folk scene that was happening back here in America at around the same time: Robbie Basho, Rick Deitrick, Richard Osborn, and John Hulburt, just to name a few’.

Shannon is clearly pleased with how the recording has been captured and you will be impressed by the striking sense of clarity and  immediacy,

‘It was intended to conjure the experience of being in one’s home, listening to someone play the guitar in the same room or perhaps the next one over; a sound I have always loved. Robert Cheek did an extraordinary job as sole recording and mixing engineer’,

There are further claims by the artist that perhaps are harder to understand and feel overblown,

‘My foremost goal was to create a collection of “songs without words”. Rather than succumbing to the tendency of instrumental music to be dry and cerebral, each composition began as a simple melody. From that seed, the idea was to tell a story that develops and unfolds throughout the song by utilizing the guitar’s orchestral qualities and capacity for harmony and counterpoint’.

Stand-out tracks are – all of them? ‘Neal’s Guitar Rag’, is a tribute to a friend in a style that is always easy on the ear. ‘Palm Reader’, with its clipped strumming and rhythmic feel is unusual and the final track, ‘Trail Song’, has the feeling of a loping horse-ride across the plains; a soothing end to a collection that successfully captures a variety of moods.

Whether songs can be songs when there are no words and whether one instrument can sound like many are academic if slightly grating propositions.  The beauty of instrumental music is that it can lead anywhere, words come with meaning and direction and thus more limitation. There again both musicians seem to share similar views as to how their art is intended to be heard and understood – so why cavil?  The salient point is that here are two very fine albums that, taken together, could almost be different sides of the same artistic coin, each bringing different pleasures by way of the same instrument.  They highlight the versatility of the guitar and the differences that can be brought by individual players.  Each in their own way is highly recommended – an 8 out of 10 for both records.

One Instrument, Two Albums, Two Artists, Much to Enjoy.