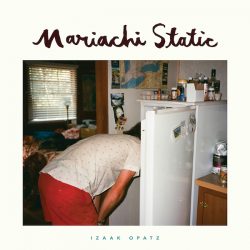 There’s a Wurlitzer playing through the bright and breezy ‘Got To Me Since’ that grounds the sound of Izaak Opatz. It’s strange, especially when you read that the quirky songwriter grew up in and around the national parks of Montana, but that recurring keyboard sound is what stops this enjoyable record from taking a flight of fancy through the hills of indie pop to staying on the muddy paths of Americana.

It returns through the gorgeous shuffle of ‘Arms Length Away’ and hovers like a thick fog behind the lovely laments of ‘Madrona’ and ‘Limited Liability’ (“she gave me love under the table”). Elsewhere, funky drums and electric guitar shuffles shoot for the sound of, say, The Band’s ‘Rag Mama Rag‘, but just fall short with precision taking preference over imperfection.

That’s not a criticism; ‘Mariachi Static’ is a cracking sounding record, but Opatz’s aesthetic seems stuck between a slacker and a harder place… the likes of ‘Not Yet’ and ‘Say What You Want’ trying too hard to offer left turns instead of melody. The straight strum of ‘One Way Or Another’ finds a crafty combination of melodic intent and daft noises, and the country stroll of ‘Pilot Light‘ is a belter, but too often the whole thing feels a little light.

‘Read Between Your Lines’ offers a rare moment of gravitas, with its gentleness and gorgeousness, before the closing vignette ‘Matilda’ waltzes around an acoustic figure and exposes the upbeat veneer Opatz has shot for. One bark of a dog later and the record is all over. The next one should be really interesting…

We’re all in the indie rock gutter, but some of us are shooting for the Americana stars…