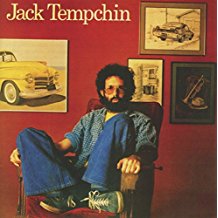 As the man who wrote Peaceful Easy Feeling for The Eagles, Jack Tempchin won the composition lottery. As well as drinking champagne from ladies shoes and lighting cigars with $100 bills, he then found time to make his own long-playing record. Jack’s eponymously named solo album from 1978 was recorded at FAME studios in Muscle Shoals with a host of fabulous musicians supporting him in his endeavour. But subsequently the album got lost in one of those record company reshuffles, when executive legend Clive Davis, who’d signed him to Arista (originally as a member of the Funky Kings), left the company. Its subsequent release in 2017 prompts two burning questions. Who are the mega-stars who helped him record it? Is this album worth digging deep for and slapping your hard-earned dosh down on the counter of Our Price? (This and other record shops may not be available.)
Jackson Browne fans and Eagles/Glenn Frey completeists will be whooping for joy. Their backing vocals across most of the album lay down a beautiful foundation that provides a delightful accompaniment to Jack’s main vocal. It’s like enjoying a glorious night down at The Troubabdour. Tom Waits and J.D Souther aficionados will also be pleased, as Waits co-wrote the boozy, dobro-delight that is Tijuana and Souther and Tempchin penned the ballad Golden Life.

Produced by Pete Carr (who also lays down some mighty fine guitar licks), Jack Tempchin transports the listener back to the mid-seventies. The dual guitars and vocal harmonies on Stingaree couldn’t be more Eagles-y if they tried. Speaking of whom, there’s an acoustic, choral version of Peaceful Easy Feeling which naturally reminds one of the original.

Peaceful Easy Feeling takes me back to the time around the age of 14 when I would bunk off school and go round to Angie and Julie’s house, while their Mum was at work, and we’d all squeeze into older brother Stuart’s tiny room. He would play DJ and Master of Ceremonies with the ever present album cover on his lap, selecting discs such as The Eagles and Steely Dan’s Countdown to Ecstasy and we’d sit there cross-legged on the linoleum floor, feeling grown-up and blissed-out, singing along to Peaceful Easy Feeling and My Old School, all of us shrieking: “And I’m never going back to my old school!” Walter Becker would have loved it! We certainly did.

Thank you, Jack, for taking me back. That was quite a trip. Now, if you’ll please excuse me: I’ve got to catch Millets before they close and buy myself a new Afghan Coat.

A tempting release from Mr. Tempchin. Back to the 70’s, maan! Yaaay!!!