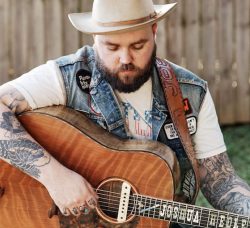 Did you know if you go to Jack White’s Third Man Records in Nasvhille you can record a vinyl record which one of those machines spits out like some kind of voodoo magic?  Anyway, RS Country report this morning on one of their finds coming good: “In November, Rolling Stone Country spotlighted country purist Joshua Hedley as a new country artist worth hearing. Now, he’s the latest country music addition to Jack White’s Third Man Records. Hedley signed to the label earlier this week.

A fixture on Nashville’s Lower Broadway, particularly the live-music outpost Robert’s Western World, Hedley has been performing live since before he was 11 years old and has been the go-to sideman for artists like Justin Townes Earle and Jonny Fritz.

“So many of my contemporaries dabble in a classic sound but there’s always some sort of new innovative twist. My new innovative twist is that there isn’t one,” he told Rolling Stone Country last year. “It’s important to exercise your creative muscles, but for me the genre of country music was perfected in 1965 and anything after that, albeit good, was experimentation.”

“Every day of the last 24 years of my life has led up to this moment,” he wrote on Instagram, with a photo of the Third Man logo. “From the first time I picked up a fiddle to right now all I’ve ever wanted to do is make music and be given the opportunity to share that music with the world … and today my life’s work finally paid off.”