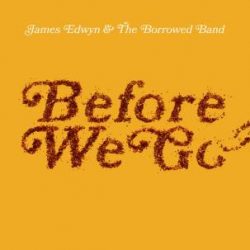 Glasgow-based James Edwyn and the Borrowed Band impressed with their 2017 album ‘High Fences’, rated a 9/10 on this site, and described as ‘The first great album of 2018’, and a follow-up release was scheduled for this year. Like many other projects the current difficulties facing musicians both performing and recording have delayed plans to finish the new album, and this release plugs the gap, seven tracks recorded in three takes over the course of a session of only 90 minutes and flagged as acoustic demos.

The full band line up boasts Edwyn and five other members, but Edwyn also plays solo or solo plus one, and this album reflects the stripped-back sound of those performances, effectively ‘live in the studio’, with acoustic guitar and vocals.

Lyrically the album leans to the challenges of the days we find ourselves in, as in opening number, a cover of The Band’s ‘The Shape I’m In’, where Edwyn sings “Out of nine lives/I’ve used seven/how in the world/do you ever get to heaven/no you don’t know/ the shape I’m in” with a backdrop of thigh-slap percussion.

The song features fine finger-picked guitar, reminding the listener of the late great guitarist and fellow Glaswegian Bert Jansch, and the varied guitar stylings on these recordings are well chosen for each of the tracks. Closing number ‘Mother Storm’ has an insistent mid-tempo pulse, over which Edwyn plays percussive picked single notes, with more than a hint of the blues, reflected too in his vocals, as he sings “Hell on Earth, hell on Earth, hell on Earth is what you want Babe”.

In contrast ‘Any Other Day’ has a gentle loping pace, in waltz time, a simple strummed guitar arrangement suiting the song’s leisurely pace, and lyrics addressing the depressing effect of current times “On some days we need a little laughter/to see/to see us through/on some days I hope you’ll get what you’ve been after/and I know you’re right/it could all just end in a day or two”.

The apocalyptic mood continues on ‘These Days’, where “lately it seems to me everything’s spinning so out of control/but nothing here seems to be fair/and it’s so hard to say/nobody seems to care these days”, the partly strummed, partly picked guitar accompaniment having the feel of a 1960’s ballad in the style of Cat Stevens, as he was back then.

This is a fine mini-album: the simple arrangements allow the topical lyrics to shine through. It’s a well-judged response to difficult times, and we await with anticipation the next full-band record.

Stripped back acoustic response to troubled times from Edwyn