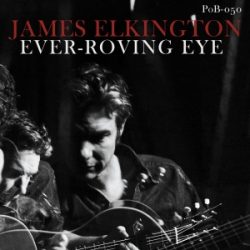 First of all, there must be apologies, as this review is late. However, this delay comes from Americana UK doing such a rare album justice. James Elkington crossed the pond in 2000, taking his guitar and voice and England’s loss was Chicago’s gain. Elkington has been a side-man for Jeff Tweedy and Richard Thompson, part of the band The Zincs, and has collaborated with many Chicago-based artists to produce some fine folk instrumental music.

‘Ever-Roving Eye’ is Elkington’s first solo effort and he has made the kind of first album that great artists look back on and wish they could reproduce. The album is simple. Every song centres around Elkington and his acoustic guitar, with  Nick Makri on double bass, and the occasional cello and fiddle. This album is a robust folk offering, with a wealth of musical talent, in the same “classically trained vein” as Jose Gonzalez and Nick Drake.

The guitar playing is flawless; the production is epic, the singing is moving bit without affectation. The lyrics and songwriting has been done with such care and with only beauty in mind.

Every track is a highlight. ‘Moon Tempering’ channels sounds from Jeff Buckley’s Grace and Led Zepellin III. ‘Carousel‘ is wonderfully reminiscent of Richard Thomson’s ‘1952 Vincent Black Lightning‘. Later, and quite seamlessly, the album goes fuzzier, with the title track sounding uncannily like Velvet Underground’s ‘All Tomorrow’s Parties‘. ‘Go Easy on October‘ echoes underrated 90’s group The Beta Band. ‘Late Jim’s Lament‘ a possible paean to Jim Morrison musically if not lyrically, blurs the already muddy edge between psych and folk. It should be surprising that there is an instrumental guitar-double bass piece, but it comes across less like a mid-album jazz interlude and more like a song where the lyrics never started.

The album is a very pleasurable tour of some of the best influences in psych-folk and acoustic-folk, and a showcase of excellent guitar picking and talent. ‘Ever-Roving Eye’ is going to be tough to beat with the bar so high for a first album but Americana UK looks forward to hearing the attempts.