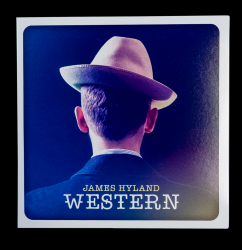 James Hyland is from Texas. Like many from Texas, he is not just from Texas; he IS Texas.  Hyland started as a member of the South Austin Jug Band, a casual party bluegrass group with no jug back in 2001. Hyland has been releasing solo albums and live albums with SAJB continuously since then. However, a decade has passed since his last recording ‘Celestial Navigation’, and it shows in the sheer length of it.

‘Western’ is a whopping 20 tracks long and includes a wealth of songs about life in the old west. Over half of the tracks talk about the gold rush or gunfights, rangers, civil war, freight trains – it is a historical concept album. The other half are timeless songs about girls, horses, stars, and guitars.

Every track has the dusty, low-down redneck sound of a local roadhouse band; Plenty of banjos, ballads, and the woodblock horse. Hyland’s voice is as gravelly as the plains. There’s something bold and honest about music by the people about a people, and that grit and truth permeate the album. It is unpretentious but well-played. In the tradition of Texan legends such as Townes Van Zandt and Guy Clarke, Hyland dusts off old stories to retell the next generation and adds his own tales. It is Americana as oral history.

The album is not all cowboys though. ‘Nashville Song’ cynically but playfully picks apart what he sees as the formulaic format of popular Country “You only need three chords and five cliches”. He declares that “I’m gonna get rich off of my Nashville song”.

The opening track, ‘Edge of Comancheria’ sets the scene, explaining the “wild, wild, land” that is Texas and the toughness of those who have defended it “We’re the people who live on the plains, if it wasn’t for us, this would all be Spain”. The album speaks volumes of the evolution of this piece of ground. It concludes with ‘STFU’ a rowdy number addressing an unnamed political speaker which suggests that “We’re all at peace, you’re serving up war” and suggests the speaker “Put a joint in your hand”, which bookends Texan violent beginnings nicely. Hyland wears a hat, but it is a modern one.

James Hyland’s ‘Western’ is a perfect bridge between the past and the future of Texas, containing a pleasant vision where we all drink beer together.

Texas Past and Future: A vision of the West from James Hyland