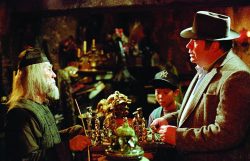 OK, you’re left with X, Y & Z they said. Not wanting to give short shrift to any Zandt or Young icon, Hoyt Axton contains an x and a y, but is he Americana? Well he started as a folk singer, ended as a country fixture, and in between had a TV special called ‘The Hoyt Axton Country Western Boogie Woogie Gospel Rock and Roll Show’, which touches a lot of Americana bases. Without ever being a major star, Axton’s talents exhibited an almost Zelig-like tendency through his career, not just through music, but on screen.

Born in Oklahoma in 1938, he now features heavily on the Oklahoma Tourist Board site. It doesn’t mention having to leave town rapidly on prom night after a hardware store ‘accidentally’ burnt down. Nor the kilo of marijuana prosecution. Neither does it mention his lifelong cocaine habit, though Axton himself was very open about this, inspiring many songs about the drugs trade. Does not mention his many wives either, though at a concert towards the end of his shortened life (died 1999 of a heart attack) he joked about finalising his third divorce, and it suddenly occurred to him to ponder ‘So is it me?’

After a few years in the Navy, he ended up in San Francisco in 1962 and started playing the nascent folk scene. This was not his first industry connection though, as amazingly, his mother co-wrote ‘Heartbreak Hotel’ for Elvis Presley (later Presley went on to cover some of Axton’s own songs). He recorded – debut album was ‘The Balladeer’, recorded at The Troubadour – but it was his songs that made an impression, and when The Kingston Trio had a Top Ten Billboard hit with his ‘Greenback Dollar’ in 1963, he was set. He was featured in a TV production of 1963 ‘Story of a Folksinger’ which started a flourishing TV and movie acting career. He was a big unit with a powerful voice (he was said to be the only male singer at The Troubadour that didn’t need a microphone), the creamy baritone of his singing voice lending well to the screen. He was frequently cast as a good ol’ boy type, or a sheriff, calm with presence, then later a father, and his most iconic role was the dad who bought Gizmo as a Christmas present for his son at the start of ‘Gremlins’.

Throughout these years, Axton kept releasing albums, to little notice other than the industry, who cherry picked his songs to provide hits for, amongst many others, Joan Baez, Glen Campbell, Waylon Jennings, Arlo Guthrie, Nina Simone. He was nowhere near to the charts until he did a couple of gentle duets with Linda Ronstadt (ironically also the only woman at The Troubadour that didn’t need a mike), (re) introducing him to the country scene with western shirt and hat.

Ringo Starr had a US No. 3 hit with his ‘No-No Song’, but the biggest hit was ‘Joy To The World’, a six week Billboard No.1 for Three Dog Night. Also known as ‘Jeremiah was a bullfrog’ after its iconic opening line, this multi-million seller was the top US hit of 1971. Fun fact: this made Hoyt and his mother Mary the first mother/son combo to have both written US No.1’s.

In the UK though, if known at all, when Hoyt Axton sings “It was Della And The Dealer and a dog named Jake….”  in his rich caramel tone, citizens of a certain age will automatically respond with “…..and a cat named Kalamazoo” in a descending bass, then wonder why they knew it. It’s because BBC Radio 2 DJ Terry Wogan played it endlessly on his Breakfast Show in 1979 to try to make it a hit (he failed, but left a legacy).

“When you consider there are about a million songs out there, it does nothing but make the inside of my brain shine when somebody records one of my songs,” Axton once said. Through the 80’s and 90’s he toured at leisure, his by now even deeper voice sweetly singing a greatest hits set of which he had barely been seen on a chart, an entertainer with gravitas and endless stories.

The Canon Although he released dozens of albums, there is nothing essential, peruse at leisure. Watch out for some witty song titles, ‘You’re the Hangnail in My Life’, ‘Boozers are Losers (When Benders Don’t End)’ and many more.

The Iconic Moment In a way, ‘Easy Rider’ can be viewed as a foresight of what Americana could come to represent. Rebellion, freedom, the tunes, the threads, the endless highways, that flag, consequence, bitter-sweet. Steppenwolf already had ‘Born To Be Wild’ on the soundtrack, but had met Hoyt Axton years earlier and already recorded his drug tale ‘The Pusher’. Axton already knew Peter Fonda from his screen career, and the cover was obviously the perfect track for the opening scene. After the drug deal at the airport, the song crunches in perfectly for the cut to the desert. The camera fetishises the Stars and Stripes fuel tank of Fonda’s Chopper as he feeds his drug money stash into the fuel tank (the symbolism!). Preparing to roar off, Fonda looks at his watch, then tosses it into the dust. Ride free, Captain America. The peerless song for a matchless opening scene. Axton’s legacy assured.