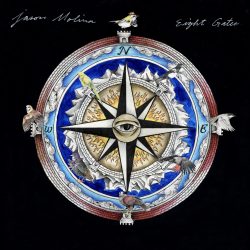 There’s a lot that could be said about this record; the fascinating and moving chronicles of Jason Molina that lead to its recording, the myths and tales Molina told (liaisons with Hendrix’s parakeets and poisonous spider bites for starters) to bolster its creation and the many personal and emotional echoes that inform its intensity.  That such a complex, simmering jumble of characters, stories and influences should yield such an unhurried, minimal and personally contemplative sounding record is testament to the artist that was Jason Molina.

‘Eight Gates’ was recorded in 2009 just four years before his untimely, alcohol assisted death and it is impossible not to hear it through this sombre filter. Whilst his passing may not define the album and certainly does not express his career output it does seem to permeate the songs and create the mood which we experience when listening to it. The compilation of the record, from 9 songs Molina mostly recorded while living in London, is dotted with snippets of studio chatter and birdsong (referencing the aforementioned parakeets). The inclusion of such ‘banter’ as “The perfect take is just as long as the person singing is still alive” does little to shift us from this prevailing mood.

That Molina’s label Secretly Canadian has chosen to release these songs under his own name rather than either of the ‘band’ identities he used during his career gives us a clue as to the record’s sound before we hear a note. It eschews Magnolia Electric Co’s grungy country-rock sound or the more ruminative indie-folk of Songs Ohia for the plaintive acoustic singer-songwriter sound of his solo records.

Even in his ‘band’ incarnations, it always felt like Molina was singing directly and only to you and so it is again on ‘Eight Gates’. It is good to hear his voice once more, even though it seems a touch more fragile and, fractured than before, like a good friend from a shared but troubled past. He uses his expressive tenor to intone the largely dark and abstract lyrics against a backing of his own acoustic and electric strums and drones, fleshed out by occasional bass from co-producer Greg Norman and keyboards (plus just about anything else) from ex Green on Red man Chris Cacavas. There are also strings from Josh Hillman and even what seem like synth hums, adding extra textures to ‘Thistle Blue’ and ‘Shadow Answers the Wall’ for instance.

All of this makes for a record that is possibly too harrowing a listen to find much actual pleasure in. Those of us familiar with and fans of Molina’s work will not be surprised that the record is mournful, even darker than usual. There is a sense of longing and emptiness at its core that is hard to take. But we also know that music doesn’t always have to be about bringing us joy and pleasure to be worthwhile. There is beauty and empathy in the bleakness here but there is only so much dismay, and anxiousness we can take and it is perhaps not a bad thing that the lp is a mere 29 minutes from start to finish.

The record may be short and may have some clearly unfinished songs (‘The Crossroads and The Emptiness’, ‘She Says’) but let’s be absolutely clear about it – this release is not some kind of tawdry scraping of the barrel to mine Molina’s growing legacy. This is a record that fans of his output can be grateful to be able to hear and which, as it stands, is worthy of our attention. However that does not totally dispel questions about how ready these songs are for the world; even though we are clearly ready for them (check out the widespread and significant coverage this release is getting). On balance it’s a good thing that we can hear them and they definitely belong in his body of work. How often we will go back to them remains to be seen however.