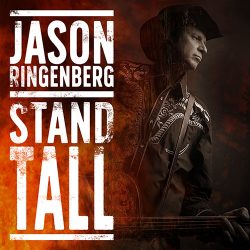 “A few years back I had resigned myself to the fact that my days as a recording artist were probably over”: so begin the sleeve notes to Jason Ringenberg’s new album ‘Stand Tall’. And fans of his music were probably expecting this too: his previous solo album, ‘Empire Builders’, was released in 2004. So, what changed? It turns out that spending a month in isolation as artist-in-residence at Sequoia National Park in northern California does wonders for your songwriting.

Album-opener ‘Stand Tall’ is an instrumental that would sound at home as the soundtrack to a spaghetti western, lush sweeping guitars, lap steel, fiddles – it’s epic and quite unexpected. Well, unexpected until Ringenberg follows this track with a monumental honky tonk number: ‘Lookin’ Back Blues’. That takes guts. Ringenberg gives his all, unashamedly playing with the lyrics “I got the lookin’ back blues and I don’t mean Luckenbach Texas”. You’ll be singing along before he throws the “solar plexus” rhyme at you. Yes, really.

The time spent in the National Park is apparent throughout the album. It is elegantly presented in the acoustically delicate song ‘Here in the Sequoias’. Harmonies from Kathy Livingston and Beth Koehler bring a softness to the lyrics: “Here in the sequoias you’re given every grace, from these giant angels who populate this place”. The thought of those huge trees watching over you sends a tingle down your spine.

In ‘John Muir Stood Here’ Ringenberg pays respects to ‘John of the Mountains’ an advocate of the preservation of wilderness in the USA: “But Muir would stand with steady hand for the public trust And save the old sequoias from becoming old sawdust“. It’s a lively, rocking tune and is super catchy.

At the other extreme is Ramones-homage, punk rock track: ‘God Bless the Ramones’ penned at the base of the Charles Young sequoia, named after the first African-American national park head ranger and US Army Colonel. Ringenberg wrote this to celebrate the time he spent supporting The Ramones back in 1985.

‘I’m Walking Home’ is a military marching song featuring tin whistles and violins, there’s a nod to a Celtic sound. Ringenberg describes it as “a fictional story, based on real history”. There’s some fantastic story-telling in this and it’s sad too: “My dad was a Rebel my brother pro-Union, they both died in battle unmarked and unknown”.

There are a handful of covers on the album, including an upbeat, ‘Many Happy Hangovers to You’ and a slow, waltzing Bob Dylan cover ‘Farewell Angelina’.

This reviewer has to admit to having never heard Jason Ringenberg before so reading accolades from Mojo describing him as the “The Godfather of Americana” and Rolling Stone proclaiming “one of America’s proudest rebels” was a little intimidating. However, the breadth of genres on this album, the confidence in juxtaposing punk, instrumentals and country proves that Jason Ringenberg is still a pioneer and can comfortably stand tall amongst his peers.

There's no sitting peacefully under the sequoias for this cowpunk legend