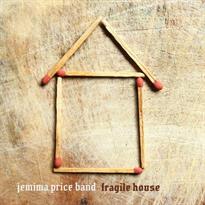 Jemima Price Band bring their second record ”Fragile House” as a follow-up to the acclaimed ”No Alibi For Alice”, a record also created as a project of love for roots music between Jemima and her long-time guitarist/producer Mirek Latosek. Jemima herself as a great voice, beautifully rich and meshing perfectly with her backing band. Nights On Fire opens the record, and indeed is one of the highlights as one of the more memorable melodic efforts on the album. The unobtrusive percussion helps drive the track forwards and the melody itself brings it to another level.

Borderlands is more subdued, with more of a guitar/rootsy percussion backing. The chorus is more anthemic, whilst the verses are reminiscent of a soft Springsteen song, albeit more polished and elegant coming from Jemima’s vocals.

The Lighthouse is our first taste of a more acoustic song, with the wail of a steel guitar being present throughout, and the acoustic guitar providing the rhythm and meat of the backing. Similarly the title track Fragile House is vocally orientated, with a soaring soprano melody showing off Jemima’s range. Again, this is a highlight of the record both for the solid writing and the great vocals featured.

Some of the most haunting vocals occur on Waiting For The Sun To Come Again, a first glimpse of a celtic folk influence in Jemima’s music. This is a favourite track, really showing off something different musically and expanding on the more mainstream first-half of the record.

Musically Fragile House is quite diverse, and is really worth a listen. Vocally Jemima Price is excellent, and her band is very well balanced against the vocals.

A solid effort from the soaring vocals of Jemima Price.