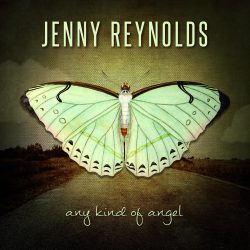 Jenny Reynolds relocated from New England to Texas in 2003. This is her fourth release and it affirms her status as an integral part of the Austin music scene. Her latest work sits effortlessly within the Americana genre combining strong storytelling lyrics with fingerpicking folk guitar and sublime vocals. The supporting cast of musicians includes Jaimee Harris (harmonies), Scrappy Jud Newcomb (strings), BettySoo (harmonies and mandolin) and Warren Hood (fiddle) amongst numerous others. All the players fit comfortably together to provide an easy structure where the songs unfold without ever feeling too controlled or driven. Jenny observed that “Generally the people I like to play and record with are people who listen to others as much as they listen to themselves, much like jazz musicians do. We may not be playing jazz, but we are responding to each other with that kind of attentiveness and creativity”.

The title song ‘Any Kind of Angel’ is an undoubted highlight, the tale concerns the trying times of a farming family in drought. The lead vocals are complemented by tight subtle harmonies and melancholy fiddle. ‘The Way That You Tease’ is a graceful languid rhythm-oriented tune. The tight cornet solo by Oliver Steck is somewhat unexpected but fits perfectly. ‘Love and Gasoline’ further emphasis the jazz-like undercurrent throughout the album with close harmony vocals and slick understated electric guitar.

‘The Way We Say Goodbye’ provides gorgeously warm vocals leading the song over gentle strummed guitar. The lyrics and the resultant melancholy air suggest this is one of the more personal songs. This journey is further developed with ‘Before I Know You’re Gone’ which captures a more traditional guitar and fiddle sound with intense plaintive vocals. Within this body of work there is an inter-twining of observational and personal storytelling where one thread is not necessarily distinct from the other. The album closes with ‘I’m So Lonesome I Could Cry’. This is a fairly extensive rework, combining strong slightly breathy vocals along with requisite slide guitar. The resultant version is a worthwhile inclusion that remains familiar yet distinctive.

As a whole, this work exudes confidence and competence throughout with no fillers. The production quality is high, with each song sounding polished, never loose. The musicianship is tight with no suggestion of showboating and there is always just enough space within the songs to appreciate each component. Jenny describes her music ‘As a love child from a three-way with James Taylor, John Mayer and Gillian Welch’ which is not an unreasonable description. This is a well balanced and structured recording showing many competencies where no single element is an afterthought.