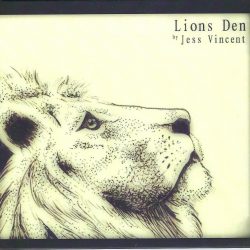 Jess Vincent and her partner, Jozeph Chowles, have achieved something quite amazing with this record. Between them they have written and produced every track on this album. They’ve also played every instrument and provided all the vocals. That would be impressive enough if we were just talking about a couple of singing guitarists but the list of instruments used on this album is extensive, without factoring in that they’ve been played by just two people. Yes, we have guitars (acoustic and electric) but we also have bass, drums and percussion, Banjo, Harmonica, Ukulele and Indian Harmonium. About the only thing they haven’t done is drawn the artwork!

Impressive that they can do all that, but is the recording any good?! Well, yes it is, it’s very good, though it is quite hard to categorise. There are elements of Alt-Folk and Americana but there’s also a very European feel to some of the tracks, not surprising given that Vincent now lives and works in Bulgaria, as well as an occasional nod to Asia, largely because of the use of the Indian Harmonium. Then there’s Vincent’s voice – at times reminiscent of Kate Bush, sometimes of Maria Muldaur and even, on occasions, sounding a little like First Aid Kit. There’s a lot going on in these songs and a lot to get your head around but the end result is certainly enjoyable.

Jess Vincent is an interesting songwriter because the songs sound very simple and yet they make quite an impact. There’s a track called ‘Holiday’ on the album that is really just about being on holiday, relaxing and taking in the sights and sounds – but then she sings about collecting pebbles and stones and it’s such a human moment, something that we’ve probably all done at some point, and with that simple reference she draws you into the song in a very meaningful way.

That’s the great strength of this album; it all seems very ordinary and simple but that’s exactly what gives it the ability to connect with the listener. Many of her songs reflect on her own life and particularly her travels and her recent decision to settle in a new country. On the haunting ‘Ghosts’, with its very atmospheric opening, played with some panache by Vincent on harmonica, she sings “I left my heart in foreign places, now I see ghosts in all their faces” and on the particularly good ‘Waiting for You’ it becomes apparent that the “you” isn’t, necessarily, a person – “I am a wanderer in life, searching for a home”. It sounds like the “you” she’s been waiting for is her new home in Bulgaria. Simple ideas, simply but effectively communicated.

There are aspects of the album that don’t always work. Vincent’s voice is a very distinctive one and that comes with its own challenges. On the track ‘Stranger’ the featured instrument is a Banjo but the song also uses slightly distorted vocals and the combination sometimes clashes. The Indian Harmonium is an interesting instrument but a little goes quite a long way. She does use it to good effect on tracks like ‘Follow’ and the previously mentioned ‘Waiting For You’ where it’s combined with guitar, but she needs to be careful with its use as it could easily overpower a track.

In all this is a very enjoyable album full of clever musical arrangements and simple but effective songs. It’s also very well produced and you have to admire the ambition in achieving all this with just two people. Jess Vincent will be touring the UK later in the year in support of this album and it’ll be interesting to see how these new songs translate to a live setting.

Simple songs delivered with real impact. An ambitious undertaking from a talented songwriter.