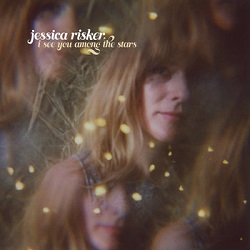 ‘I See You In The Stars’ has a gossamer lightness; it’s wooden music – mostly just a percussive guitar, but with occasional synthetic sounds strung across a tune – like a wispy strand of the glinting lights of Faery. Jessica Risker maintains a dreamlike presence across the album, her vocal the distilled essence of blissed out fragility. It’s as if she’s singing just for herself, in a shaded bedsit, with beams of sunlight cutting through the smoke rising from what is surely a joss stick. Her songs are warm with tales of love, observed with a razor sharp intensity but revealed with a languid nonchalance. In short, ‘I See You In The Stars’ is an album of psychedelic-folk, recalling the likes of Vashti Bunyan and Laura Veirs in delivery, and with an accompaniment which suggests that Jessica Risker has, as is only proper, at some point listened obsessively to ‘Blue’ and through a process of osmosis has absorbed the atmosphere of heartbreak from Joni’s ‘Little Green’.

For there is, for all the surface sheen of romantic attachment, an obsessive element to these songs, whether it is the desire to be made to fit on ‘Reassign Me,’ or the stoned detachment of ‘Zero Summer Mind’ which minutely describes a shopping expedition throughout which Jessica Risker has no thoughts of the world she is in, but only of the man who isn’t there. Album closer ‘Help Me Help Me’ couldn’t encapsulate this feeling any more directly – as Risker sings of patient waiting for a man to return it is as much a portrait of desperate dependent helplessness as a picture of longing for the warmth of love. It’s this contrast of light music and the touch of existential darkness that makes ‘I See You In The Stars’ entrancing listening.

Jessica Risker beautifully explains that dreams don’t have to be nightmares to be disturbing.