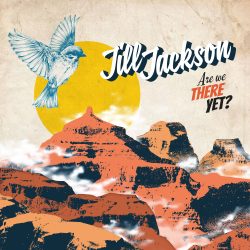 ‘Are We There Yet?’ is the fifth solo album by Glasgow based singer-songwriter Jill Jackson and her journey to this point has been intriguing to say the least. Relocating to Nashville led to an embrace of storytelling songwriting and a renewed source of inspiration. A tour of fifty states in fifty days speaks of her commitment to sharing her music far and wide. Previously being signed to a major label brings experience and self-knowledge. In short, Jackson knows what she wants and has the drive to make it happen.

Returning to Scotland and winning the acclaimed ‘Danny Kyle’ award at Celtic Connections, coupled with being named as one of the top ten acts tipped as the ‘UK Country’s Next Big Thing 2018’ confirms that the journey will continue a while yet.

Produced by Boo Hewerdine (Eddi Reader, Emily Barker), ‘Are We There Yet?’ is a set of songs that is clearly linked to the origins of Americana. There are swing, jazz and country influences here alongside an innocence that feels nostalgic for the idea of the development of roots music. The album embraces a traditional approach to country and is confidently and expertly produced. “These songs fell out of my heart and guitar with a little bit of country, rock n roll and old timey.” says Jackson. As a description of the album this works well.

Opener ‘1954’ is melodic and dreamy. Based on the story of her grandparents it’s a romantic song that sets the tone. Expertly sung and played it sounds like an old favourite. Nostalgic but not a pastiche. A nice balance. ‘Are We There Yet?’ is a skilful lyrical mix of Buddy Holly, family holidays and Blackpool in the 1980s. A highlight that showcases her lyrical talent. It’s a good tune too.

The final three songs on the album ‘Hope and Gasoline’, ‘Dynamite’ and ‘Goodbye’ feel less stylised and to an extent more authentic than some of the earlier compositions. This collection gets stronger towards the end which is intriguing. The songwriting here is personal and a little dark at times. The effect is to add more depth and feeling.  Jill Jackson asks if she’s there yet. She very nearly is but let’s enjoy the journey too.

About Denis Parkinson 14 Articles
Musician and writer based in Liverpool, England. Denis spends his time making music, listening to music, talking about music and writing about music. What else is there?